A ballistic knife is a knife with a blade that can be ejected to a distance of, at most, several feet by pressing a trigger, pulling a stop pin or operating a lever or switch on the handle. The majority of such designs utilize a compressed coil spring to eject the blade. A few designs have utilized compressed gas propulsion.

Spring-powered ballistic knives briefly gained notoriety in the United States in the early to mid-1980s, most marketed as a “KGB Ballistic Knife” despite no evidence that the Soviet Union’s KGB ever issued or utilized such an impractical knife. At times since the 1980s various companies in the U.S. have produced variations of these knives in limited quantities, seemingly primarily for their novelty or collector value. Not a single incident of these knives being used to commit a violent crime has been identified. 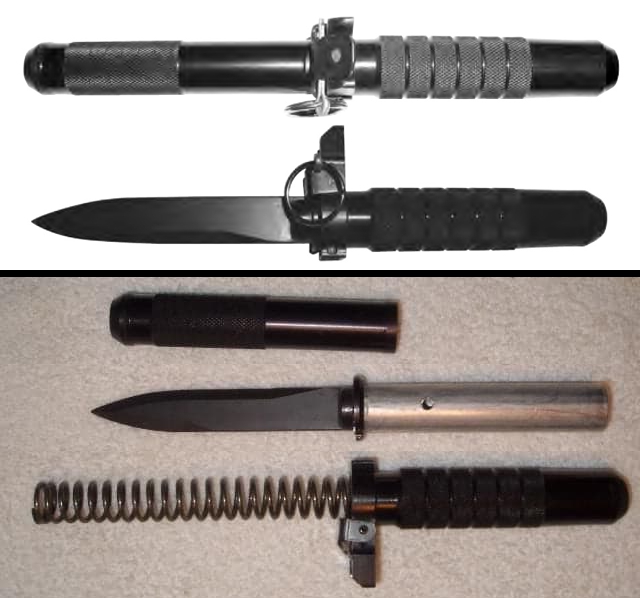 Senator Alphonse D’Amato (R-NY) introduced the Ballistic Knife Prohibition Act in April, 1986 (H.R.4711).  The bill was supported by uncorroborated testimony from a single congressional witness that ballistic knives could be used to defeat body armor typically worn by police officers. A staged and unrealistic demonstration against a wood-backed target supported the testimony.

The new federal statute became part of the Federal Switchblade Act and prohibited future importation or interstate commerce in these knives. In addition to fines, the statute provides only for Ballistic Knives, not switchblades (or gravity knives) that the possession or use during commission of Federal crime of violence shall be subject to being imprisoned not less than five years and not more than ten years.

Only ten states have made Ballistic Knives per se illegal:

In addition, they may be considered illegal in Washington due to that state’s odd switchblade ban statute with its vague definition of a “spring blade knife.”

So, to conclude, in 39 or 40 states there are no prohibitions on possession and carry of Ballistic Knives that don’t apply to knives generally.