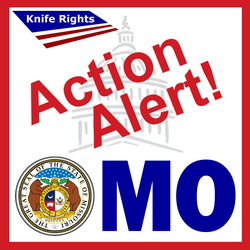 In Missouri a bill to enact firearms and weapons law reforms, HB1462, has passed the Senate Governmental Accountability and Fiscal Oversight Committee including further legalization regarding the possession of switchblade (automatic) knives.

When Knife Rights worked to enact SB489 in 2012, repealing Missouri’s total ban on switchblades, we had to compromise and instead of a clean repeal, it was with the proviso that switchblades were prohibited if “in violation of federal law.” That had little impact on most residents of Missouri, but unfortunately it opened the door to abuse by some prosecutors and law enforcement. This bill would delete switchblades from that section of the law, eliminating all mention in Missouri statutes.

If you live or work in Missouri, it is critical to email Senate Majority Floor Leader Caleb Rowden and ask him to bring HB1462 up for debate and a vote of the full Senate as soon as possible. Use Knife Rights’ Legislative Action Center to easily send an email to Sen. Rowden: https://kniferights.org/resources/congressweb/#/51

Knife Rights is America’s grassroots knife owners’ organization; leading the fight to Rewrite Knife Law in America™ and forging a Sharper Future for all Americans™. Knife Rights efforts have resulted in 37 bills enacted repealing knife bans in 25 states and over 150 cities and towns since 2010.