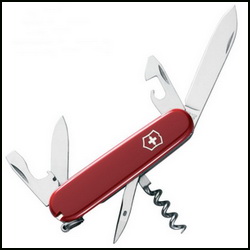 In a unanimous decision, the California Supreme Court yesterday affirmed a lower court ruling which held that a common slipjoint folding knife, in this case specifically a “Swiss Army Knife,” was not a “dirk or dagger,” prohibited under California law when carried in the open position and concealed. Click here to read the decision.

The case arises from a 2012 arrest of a man in San Diego, California, after a traffic stop. Mr. Castillolopez was a passenger in the vehicle, who was found to be in possession of a Swiss Army Knife, which was being carried in a jacket pocket, with the blade in the open position. Mr. Castillolopez, a person of color, was not cited or charged with any crime other than possession of a Dirk or Dagger, the concealment of which is a felony under California law.

Mr. Castillolopez was convicted of carrying a dirk/dagger, but his conviction was reversed on appeal, as the appellate court found there was no evidence that the open blade of the Swiss Army Knife was “locked into position,” and therefore, definitionally a dirk or dagger under California law. California Attorney General Kamala Harris appealed the decision, claiming that it was a lockblade knife. The California Supreme Court today affirmed the lower court’s reversal.

In an amicus (friend of court) brief, Knife Rights Foundation, joined by the Second Amendment Foundation (SAF), had urged the California Supreme Court to affirm the appellate court reversal of Mr. Castillolopez’s conviction. Our brief expressed specific concern about the over-criminalization of the carrying of innocent items highly unlikely actually to be used as weapons. Knife Rights Foundation and SAF also argued that a Swiss Army knife was neither historically a stabbing weapon, nor did it fit the definition as one because it lacked an overt locking mechanism that would allow its blade to be locked in place within the meaning of the statute.

Castillolopez’s attorney, Raymond Mark DiGuiseppe, invited Knife Rights Foundation to participate in the oral argument and the Supreme Court granted the request. At oral argument, Knife Rights Foundation and SAF’s attorney asserted that the knife in question contained a simple “slipjoint” mechanism, a feature that is common to Swiss Army-style knives, and that such a mechanism would not allow the knife to be “locked into place” as the California legislature intended when it amended the dirk and dagger statute in the 1990s.

Moreover, if Attorney General Harris were to prevail, then virtually any folding knife would be considered a lockblade knife in California, which defied both common sense and the intent of the legislature.

George M. Lee, a partner at Seiler Epstein Ziegler & Applegate LLP, attorneys for Knife Rights Foundation and SAF, said he was gratified by the court’s unanimous ruling today. “It’s a victory of common sense, and a small step away from the reflexive view that any citizen carrying a pocketknife is also considered to be carrying a deadly weapon, which of course, would be nonsense.”

Knife Rights Chairman Doug Ritter said, “this was an important case for knife owners because it could have redefined slipjoint knives as lockblade knives, which would have had potentially far-reaching consequences for knife owners in California and elsewhere. We are very pleased that the California Supreme Court declined to be taken-in by the Attorney General Harris’ far-fetched arguments.”

Ritter expressed his appreciation to Second Amendment Foundation for partnering in the amicus brief and to Calguns Foundation and Firearms Policy Coalition for their assistance and support. Ritter also congratulated attorney Guiseppe for his outstanding and extraordinarily well-researched and eloquent defense of Castillolopez and noted, “we were honored to stand beside this passionate defender of a knife owner’s civil rights in this critical case.”

April 14, 2015: A legal brief urging the California Supreme Court to rule that common, non-locking Swiss Army Knives and similar pocketknives are not illegal ‘dirks’ or ‘daggers’ was filed on Monday.

George M. Lee, a partner at the San Francisco law firm of Seiler Epstein Ziegler & Applegate, wrote the “friend of the court” brief in the criminal matter of State of California v. Emmanuel Castillolopez on behalf of the civil rights organizations Knife Rights Foundation and Second Amendment Foundation.

“For simply having a common, everyday Swiss Army multi-tool with the blade open in his pocket, Mr. Castillolopez was charged, prosecuted, and convicted of a very serious crime,” explained Lee. “We strongly believe that the Court of Appeal correctly held that the State’s arguments are wrong on the law and hope the Supreme Court similarly disposes of the matter in its forthcoming decision.”

The case stems from a dispute over section 16470 of the California Penal Code, which defines a dirk or dagger as “a knife or other instrument….that is capable of ready use as a stabbing weapon that may inflict great bodily injury or death.” But, for everyday pocketknives like the one at issue in Castillolopez, the definition applies only “if the blade of the knife is exposed and locked into position.”

Castillolopez, a person of color, was convicted in 2012 by a San Diego County jury for illegally carrying a concealed dirk or dagger after law enforcement found a Swiss Army Knife with the blade open in his pocket following a traffic stop. The Fourth Appellate District of the California Court of Appeal later overturned his conviction, holding that Castillolopez’ pocketknife didn’t meet the statutory definition of an illegally-carried ‘dirk’ or ‘dagger’ because it didn’t have a locking mechanism.

Doug Ritter, founder and Chairman of the Knife Rights Foundation, said, “Ultimately, our important brief is about protecting knife owners from prosecutorial overreach by maintaining the historical definition of a ‘dirk’ or ‘dagger’ in California. If the State wins this case with their expansive theory on how a ‘dirk’ or ‘dagger’ is defined, every Boy Scout and slipjoint folding knife owner in California might one day be guilty of a felony. With millions of Californians at risk, and a potential bad state precedent to be set, we were compelled to stand up for their rights as we have elsewhere in this country when the government attempts to overreach in cases against knife owners.”

Second Amendment Foundation founder and Executive Vice President Alan Gottlieb agreed, saying that he hoped the high court would keep owners of regular, non-locking pocket knives from being subjected to felony criminal liability. However, he was quick to clarify that, “in order to secure the rights of law-abiding people, sometimes we have to take a strong position on a law’s application, even when the person at issue in a given case isn’t ideal.”

Knife Rights would like to thank our good friends at the Second Amendment Foundation, Cal Guns and the Firearms Policy Coalition for their support of this brief.

A copy of the filed Amicus Brief can be viewed at: http://www.kniferights.org/KRF-SAF_Amicus_Brief.pdf

The Opening Brief from California Attorney General Kamala Harris can be viewed at: http://www.kniferights.org/S218861_OBM_People.pdf

The Appellant’s Answer Brief can be viewed at: http://www.kniferights.org/S218861_ABM_Castillolopez.pdf

The State’s Reply Brief can be viewed at: http://www.kniferights.org/S218861_RBM_People.pdf