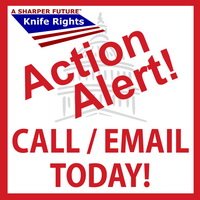 Senator Roger Wicker (R-MS) has introduced S.3264, the Knife Owners’ Protection Act of 2018 (KOPA) including repeal of the Federal Switchblade Act. This is a companion to the House KOPA bill, H.R.84, introduced last year. Originally conceived and authored by Knife Rights in 2010 and first introduced in 2013, KOPA will remove the irrational restrictions on interstate trade in automatic knives that are legal to one degree or another in 44 states, while also protecting the right of knife owners to travel throughout the U.S. without fear of prosecution under the myriad patchwork of state and local knife laws.

Sen. Wicker said, “I am pleased to introduce the Knife Owners Protection Act. This legislation would provide law-abiding knife owners the appropriate protection when transporting knives across state lines. It would also repeal the antiquated Federal Switchblade Act. I look forward to working with my Senate colleagues to advance this sensible policy for knife owners”

Knife Rights Chairman Doug Ritter said, “We are proud to have Senator Wicker leading the KOPA effort in the Senate, a bill that will actually protect traveling knife owners and repeal the archaic and useless Federal Switchblade Act. It is clear that Senator Wicker understands the plight of knife owners placed in legal jeopardy by the patchwork of knife laws they encounter traveling in America.”

Unlike S.1092, the problematic and seriously inadequate Interstate Transport Act that was recently marked up in committee and which is being promoted by one segment of the industry, S.3264 and H.R. 84 include a robust Right of Action that would actually provide real protections for knife owners that need these protections the most.

A Right of Action provides for persons unlawfully detained for transporting their knives properly secured in compliance with the act to seek financial compensation from a jurisdiction that ignores the intent of Congress to protect these travels. Without a strong right of action, there is no deterrent—biased and rogue jurisdictions like New York and New Jersey would have no incentive to follow the law.  In a state like New Jersey, where knife law offences are felonies, it is especially critical to dissuade them from prosecuting law-abiding citizens.

Ritter said, “ignoring the unfortunate lessons of the past and passing a knife transport bill without a robust right of action would be unconscionable and an extraordinary disservice to knife owners and the entire knife community.  KOPA’s right of action provides the teeth needed to actually give real protection to knife owners.”