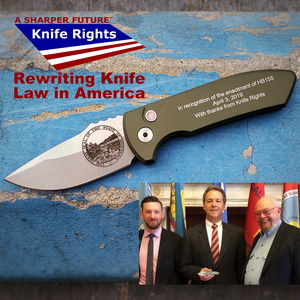 Knife Rights Board member Ethan Becker attended representing Knife Rights. Ethan presented the Governor his first ever automatic knife, a specially inscribed Protech SBR, as an award in recognition of his signing of the bill. 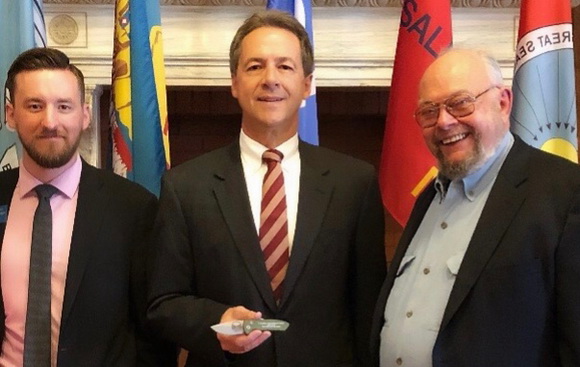 Also attending was activist Joe Paschal and ACLU of Montana Director of Advocacy and Policy S.K. Rossi.. Not in attendance was Knife Rights member and activist E.J. Redding, who went the extra mile for knife owners in Montana and played a critical role in this accomplishment. Bill sponsor Rep. Casey Knudsen worked closely with Knife Rights’ Director of Legislative Affairs, Todd Rathner, on HB155, and deserves our gratitude for his significant efforts which resulted in the bill’s passage and the Governor’s signature.

All involved also received one of the inscribed Pro-Tech SBRs in recognition of their vital assistance in getting HB155 enacted.

With the repeal of the state’s prior restriction on switchblades, automatic knives are now completely legal in Montana. Montana is the 16th state to repeal its ban on switchblade (automatic) knives since Knife Rights started in 2010.

Since 2010 Knife Rights has been Rewriting Knife Law in America™ with 30 bills repealing knife bans enacted in 21 States, forging a Sharper Future for all Americans™. Knife Rights is the one getting it done™ for America’s knife owners and knifemakers.