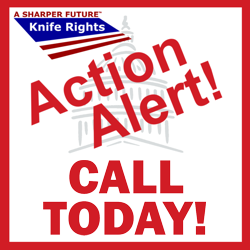 Knife Rights’ Gravity Knife Law Reform Bill,  A.5667-A, has been transmitted to Governor Cuomo. If you live, work or travel in New York, or plan to,  CALL the Governor TODAY and STOP the OUTRAGEOUS arrests and prosecutions in New York City! The Governor now has 10 days (excluding Sunday) to sign or veto the bill, or allow it to become law without his signature.

The sponsors, Assemblyman Dan Quart and Senator Diane Savino, Knife Rights, and our partners including the Legal Aid Society, agreed to amend the bill to address Governor Cuomo’s objections to last year’s version which he vetoed on New Year’s Eve. There is no logical reason for Governor Cuomo to do anything but sign this bill into law.

This bill passed the Legislature by overwhelming margins,136-1 in the Assembly and 61-1 in the Senate. This bill will prevent hundred’s of bogus arrests every week in New York City. Martin LaFalce of the Legal Aid Society called these arrests and prosecutions “the most discriminatory criminal justice practice in New York State.”

LET’S GET THIS DONE! Regardless of your personal views of Governor Cuomo or his politics on any other issue, if you live, work or travel in New York, or plan to, please CALL Governor Cuomo TODAY and simply deliver the message that you are “calling to respectfully request that Governor Cuomo please sign A5667-A,” and then thank him. Please be POLITE and RESPECTFUL and REMAIN ON POINT.

THIS IS NOT THE TIME TO BERATE THE GOVERNOR ABOUT ANY OTHER POLITICAL ISSUES – STAY ON MESSAGE.

If you are a New York state resident, you can SEND AN EMAIL to Gov. Cuomo using Knife Rights Legislative Action Center.

Otherwise, Governor Cuomo makes it painful to communicate
with him online. If you are a masochist, you can go to:
www.governor.ny.gov/contact and fill out the lengthy form
(for “Topic” select: “Criminal Justice”). WE RECOMMEND CALLING.
.
Again, please be POLITE and RESPECTFUL and REMAIN ON POINT; just deliver the message, “I am calling to respectfully request that the Governor please sign A5667-A,” and then thank him. That’s it, keep it short, simple and ON POINT and above all BE POLITE and RESPECTFUL.

In addition to Knife Rights, this effort to fix the Gravity Knife law has been endorsed by the following organizations and persons over the time we have been trying to fix this issue in New York City:

New York State’s Office of Court Administration called for reform of the law to prevent these arrests and prosecutions, although it has not specifically endorsed this bill.

In response to the Governor’s objections to last year’s bill, this year’s bill removes “centrifugal force” from the definition of a gravity knife and adds “solely” to create a bright-line definition that even overzealous New York City law enforcement and prosecutors can understand, as desired by the Governor. It would preclude the unconstitutionally vague “wrist flick” test that has resulted in over 60,000 arrests and prosecutions in New York City which the Governor himself described as “absurd” in vetoing last year’s bill.

Any true gravity knife, as the term is understood everywhere but in New York City, will still be prohibited by the “released from the handle or sheath thereof solely by the force of gravity” portion of the definition, but common folding knives could no longer be considered gravity knives.Save