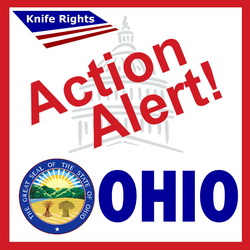 The Ohio House yesterday passed Knife Rights’ Ohio Knife Law Preemption bill SB 156. A clarifying technical amendment was made to the bill in committee, so it also required a concurrence vote by the Senate, which concurred late yesterday. SB156 is the culmination of six years of work in Ohio and it is now on its way to Governor Mike DeWine for action.

Knife Rights would like to thank Senator Kristina Roegner and Representative Al Cutrona for sponsoring Knife Rights’s Knife Law Preemption bills, SB156 and HB243. We could not have gotten this passed without their strong support and efforts.

Knife Rights is America’s grassroots knife owners’ organization; leading the fight to Rewrite Knife Law in America™ and forging a Sharper Future for all Americans™. Knife Rights efforts have resulted in 37 bills enacted repealing knife bans in 25 states and over 150 cities and towns since 2010.