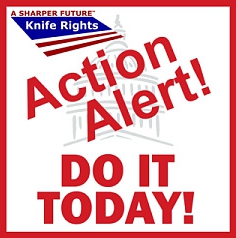 The Ohio Senate Committee on Government Oversight and Reform passed Knife Rights’ Ohio knife law reform bill, SB 140, by a vote of 9 – 1.  The next action will be a vote of the full Senate, which could come as early as next week. If you live, work or travel to Ohio, please use Knife Rights’ Legislative Action center to email your Senator and ask the Senator vote YES on SB140:  kniferights.org/resources/congressweb/#/32

Knife Rights has been working on this bill in various forms for six years now. Knife Rights Director of Legislative Affairs Todd Rathner attended hearings in Columbus last week and again this week working to get this bill passed.

SB 140 addresses the often abusive and discriminatory application of the existing Ohio weapons law against knife carriers, clarifying that unless the knife/edged tool is actually used as a weapon, it can be carried. The intent of the bill is to allow the carry of any knife as long as it is not used as a weapon.

Currently it’s legal for an individual to own an automatic (switchblade) knife in Ohio, but irrationally, it’s illegal to manufacture or sell that same knife in Ohio. This means potential consumers have to either go online or travel to another state to purchase these popular knives. Likewise, Ohio manufacturers, such as longtime Knife Rights supporter Rick Hinderer Knives, cannot manufacture these automatic knives in Ohio, shutting them out of a significant and growing market. Ohio loses jobs and revenue under current law and this bill is a commonsense solution to that absurdity.

SB 140 repeals Sec. 2923.20(A)(6), the state’s ban on the manufacture and sale to civilians of switchblade knives, springblade knives and gravity knives, as well as brass knuckles, cestus, billy, blackjack, sandbag or any similar weapon

In addition, SB 140 creates an exception to Sec. 2923.12(1)(A), the state’s vague catchall provision banning concealed carry of any “deadly weapon other than a handgun.” It adds a new paragraph (H), “for purposes of this section, ‘deadly weapon’ or ‘weapon’ does not include any knife, razor, or cutting instrument if the instrument was not used as a weapon.”

Knife Rights is Rewriting Knife Law in America!™ with your help. 31 bills enacted in 22 states since 2010! Support Knife Rights’ efforts to Forge a Sharper Future™ with a donation in the Ultimate Steel™ Spectacular and get a chance to WIN from OVER $160,000 in Custom Knives, Guns & More! Thousands of Dollars of TAIL END BONUS Prizes Received at BLADE Show are being added. DONATE NOW to ALSO get in the TAIL END BONUS DRAWING! www.UltimateSteel.org