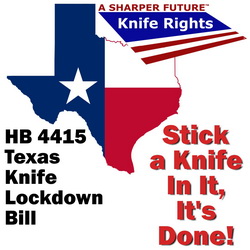 We are very happy to announce that the Texas Knife Lockdown bill, HB 4415, has, for all practical purposes, died without a committee vote. All normal deadlines to move the bill have passed. To paraphrase, stick a knife in it, it’s done!

This ill-conceived bill would have required broadly defined “retail establishments” in Texas, including knifemakers at knife shows, to only display knives “in a locked transparent case accessible only with the assistance of an employee of the establishment.”

Thanks to all who used Knife Rights’ Legislative Action Center to email and call the committee members to oppose this terrible bill. Todd Rathner, Knife Rights’ Director of Legislative Affairs, met numerous times with legislators, their staff and others to explain the adverse impact the bill would have had. Your calls and emails helped reinforce his lobbying efforts against the bill.

This is the ninth anti-knife bill in seven states that Knife Rights’ lobbying efforts have been directly responsible for stopping. Alongside our record of Rewriting Knife Law in America, we’re also the only knife advocacy organization on the front lines in the state houses effectively stopping bad knife bills, with your support.