Knife Rights represents America’s millions of knife owners, knife collectors, knifemakers, knife artisans (including scrimshaw artists and engravers) and suppliers to knifemakers and knife artisans. As written, the proposed rule will expose many individuals and businesses to criminal liability for activities that are integral to the legitimate ownership, investment, collection, repair, manufacture, crafting and production of knives. Even where such activities may not be directly regulated by the proposed rule, its terms are so vague and confusing that it would undoubtedly lead to excessive self-regulation and chill harmless and lawful conduct.

The Agency’s proposed revisions to the rule for the African Elephant under section 4(d) of the ESA (“the proposed rule”) must be withdrawn, or in the alternative, significantly amended to address these terminal defects:

For the foregoing reasons, the Agency must withdraw or significantly amend its proposed revisions to the rule for the African Elephant under section 4(d) of the ESA. However, considering the extraordinary and unprecedented magnitude of the violations listed above, any effective curative revisions would be so extensive that they are difficult to envision without withdrawing and restarting the rulemaking process. Even then, it is hard to envision any proposed rule that can withstand legal review since the raison d’être for the proposed rule is fundamentally flawed.

As it stands, the proposed rule change violates the APA, DQA/IQA, SBREFA, RFA and ESA by misrepresenting expert findings and by failing to present a factual basis to support their conclusions and neglecting to adequately consider cost and economic impact. The proposed rule change also violates Executive Orders 12866 and 13563, failing to promote predictability, to reduce uncertainty, and to use the best, most innovative, and least burdensome tools for achieving regulatory ends. Finally, the proposed rule also imposes unconstitutional Fifth Amendment takings without compensation.

Knife Rights abhors the poaching of all species. The proven solution is to attack poaching at the source and in the primary destinations for the illegal ivory, not punish lawful ivory owners in the U.S. who cannot have any effect on poaching in Africa. Successful anti-poaching programs in Africa have demonstrated that an integrated comprehensive approach that support law-enforcement in the field and encourages the locals to fight poaching does work to save elephants. Stealing the investments of millions of Americans will not save a single elephant in Africa.

The failure of the Agency in its proposed rule to abide by longstanding laws specifically enacted to prevent administrative bodies from abusing their power to the detriment of ordinary citizens makes these violations particularly egregious and abhorrent. This proposed rule is promulgated contrary to law and to American values of fairness and justice.

The submission of comments only marks another milestone in our opposition to this draconian and ill-advised rule that only serves to steal from honest Americans and which won’t save a single elephant in Africa.

The most important thing you can do right now is to contact your U.S. Representative and Senators to ask them to co-sponsor the African Elephant Conservation and Legal Ivory Possession Act of 2015 which would protect honest U.S. ivory owners while providing for additional conservation and anti-poaching efforts in Africa. Click for more information.

This proposed regulation is based on three FALSE premises being promoted by the Administration for entirely political purposes:

Right now, the very best action you can take is to CALL or EMAIL your Representative and Senators and ask them to Co-Sponsor the African Elephant Conservation and Legal Ivory Possession Act of 2015 (H.R. 697 or S.1769, respectively) to protect both elephants and Americans. You can find your U.S. legislators and send them all an email here: www.democracy.io 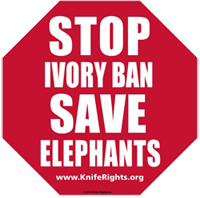 Comments are due on Monday, September 28, 2015, to oppose the U.S. Fish and Wildlife Service’s (FWS) Proposed Rule Change that would implement a domestic ivory ban affecting millions of Americans, including owners of ivory-handled knives and knives with ivory embellishment. With very few very limited exceptions, it would be illegal to buy, sell or trade any ivory or any item with even the smallest bit of ivory included. Not a single elephant will be saved by punishing owners of decades-old perfectly legal ivory that has been in this country since before import bans were implemented in 1990. Practically all the poached ivory goes to China or Asian countries, virtually none of it come to the U.S. (Click here for additional details on the Proposed Rule Change and a link to the published NPRM)

Knife Rights abhors the poaching of all species. The proven solution is to attack poaching at the source, not punish lawful ivory owners in the U.S. who cannot have any effect on poaching in Africa. Successful anti-poaching programs in Africa have demonstrated that an integrated comprehensive approach that encourages the locals to fight poaching does work to save elephants.

Stealing the investments of millions of Americans will not save a single elephant in Africa. This is the worst kind of "Feel Good – Do Bad" government action.

As of Wednesday, Sept. 23, over 1,500 comments have been submitted. Too many are from people who make simplistic and emotional statements about saving elephants or repeat factually unsupported slogans from non-profit organizations making millions of dollars off this campaign to ban ivory. However, many others are thoughtful comments explaining why the proposed rule punishes innocent Americans without doing anything to stop poaching in Africa. We need you to add your voice of reason to those opposing this absurd, abusive and illegal ivory ban.

* The Proposed Rule Change is arbitrary and capricious.  It punishes people who have invested in ivory, including ivory-handled knives and knives with ivory embellishment, that was legally imported decades ago which has nothing to do with recent African elephant poaching. The government should focus resources on stopping poachers in Africa and prosecuting criminals who smuggle ivory to Asia if it wants to stop elephant poaching.  Punishing innocent Americans who own or trade ivory that was legally brought to this country before the poaching crisis has no rational relationship to poaching African elephants, so the Proposed Rule Change seriously violates the federal Administrative Procedure Act.

* FWS misrepresented data and studies about ivory in the United States.  CITES data shows that hundreds of tons of illegal ivory flows to China and Asia, but almost none of it comes to the United States.  Even Dr. Daniel Stiles, an expert FWS relied upon in the Proposed Rule Change, submitted a comment pointing out how FWS has misrepresented his research. http://www.regulations.gov/#!documentDetail;D=FWS-HQ-IA-2013-0091-0415 The legal ivory import control system in place before February 2014 was working in the United States, and government prosecutions show that they were certainly capable of investigating and successfully prosecuting the very few people who break the law.  Creating a new class of criminals from people who need to sell or trade in otherwise legal ivory will waste resources, distract from enforcement efforts against actual poachers and smugglers, and unfairly persecute people who abided by international trade bans that were already in place. Along with creating bad policy, FWS’s misuse and misrepresentation of data is an egregious violation of the federal Information Quality Act. (Click here for more background on this blatant violation of the law)

* FWS’s claim that less than 2% of ivory sales will be impacted by this ban is nonsense.  (Here you should describe how the ban would impact your business or collection individually, where applicable.)  Conclude by stating that this ban falls almost entirely on small businesses, so the FWS certification in the proposed rule that it would not have a significant economic effect on a substantial number of small entities as defined under the Regulatory Flexibility Act is false.  As is their finding under the Small Business Regulatory Enforcement Fairness Act that there is not a disproportionate impact for small or large businesses.

* The exceptions in the Proposed Rule are useless and do not adequately allow legal and legitimate commerce as directed in Executive Order 13648 on Combating Wildlife Trafficking in July 2013.  To qualify for any exception, a person would need to provide documentation about import, sales and transfers that was not required in the past, so it was never created.  FWS undermines all of the exceptions, which are irrational, vague and arbitrary in any case, by placing an unachievable burden on legal ivory owners.  The agency also fails to describe specific documentation burdens with specificity, so even if an owner or business has some documentation about an ivory item, he or she cannot be certain whether documentation is adequate. These failures are serious violations of the federal Administrative Procedure Act.

* Add any additional personal objections to this irrational and abusive rule that is unfair, un-American and will not save a single elephant in Africa. Please be polite in your comments so they will be taken seriously.

Conclude by demanding that FWS must either withdraw the proposed rule entirely for its failure to follow the law or, alternatively, at a minimum publish an extensive revision correcting its many errors for a full new notice and comment period. Nothing less is acceptable.

The above are suggestions that you can adopt or add to as you see fit.

FWS does not accept comments by e-mail or fax.  You need to submit comments online by 11:59 PM, September 28 at:  Fish and Wildlife Service (FWS) Proposed Rule: Endangered and Threatened Wildlife and Plants: African Elephant (Loxodonta africana) Rule; Revision or http://www.regulations.gov/#!documentDetail;D=FWS-HQ-IA-2013-0091-0001

You can also view comments already submitted at this website. (Alternatively, if that link doesn’t work, then go to http://www.regulations.gov. Once at the website, search: FWS-HQ-IA-2013-0091)

Click on the "Comment Now" button in the upper right-hand corner of the page. Follow the instructions on screen for submitting comments. When submitting comments, you can either identify yourself or type "Anonymous" in the required name fields.  You can type your comments directly into the provided text box, copy and paste into the text box or upload a file (below the text box).

If you must submit comments by mail, they must be postmarked by 11:59 PM, September 28. Mail them to: