Knife Rights’ bipartisan Texas Knife Law Reform Bill, HB 956, was passed by the Texas House of Representatives today by a vote of  142 to 2. It now moves to the Senate for their consideration. Thanks to all our Texas members and supporters who used Knife Rights’ Legislative Action Center to email their Representatives to support this bill.

HB 956 would remove from statute a number of places where Location-Restricted Knives (having blades over 5 1/2 inches) are banned, including restaurants and bars that derive 51% of their income from sale or service of alcoholic beverages, amusement parks and places of religious worship.

Knife Rights would like to express our sincere appreciation to our bipartisan HB 956 sponsors, Representatives Harold Dutton and John Frullo. They have been steadfast in their support for our efforts to roll back Texas knife restrictions since 2013. 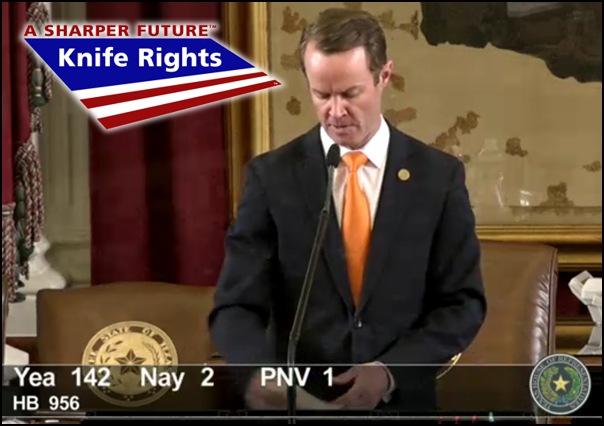 In 2013 Knife Rights’ repeal of Texas’ switchblade ban was enacted. In 2015 Knife Rights’ signature Knife Law Preemption was enacted, nullifying all local knife ordinances more restrictive than Texas state law, including two of the “10 Worst Anti-Knife Cities in America” at the time, San Antonio and Corpus Christi. In 2017 our bill removed all of the “illegal knives” in Texas law, finally allowing Texans the right to carry a Bowie knife, dagger and others in public. In 2019 the ban on carry of clubs (including tomahawks) and possession of knuckles (including trench knives and the like) was repealed.