DONATE TODAY!
You Could WIN from
OVER $100,000 in
Knives, Guns & More!!
DONATE NOW for EXTRA PRIZES
in the EARLY BIRD Bonus Drawing
TWO CHANCES to WIN! 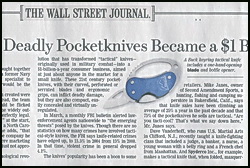 Reading that article I became incensed at the blatant, misguided attack on our everyday tools. I realized that there was no NRA for knife owners. There was no aggressive, proactive grassroots organization working to stop the U.S. from sinking into the anti-knife, anti-freedom pit that already exists in Europe and the U.K.

That article ignited a new civil rights movement. Over the past decade Knife Rights has literally rewritten knife law in America. More knives and more freedom couldn’t have been further from his objective, but that’s exactly what he got. Thank you, Wall Street Journal.

Help celebrate a decade of Knife Rights’ unprecedented achievements by making a donation in the Ultimate Steel™ Knives, Guns & More Spectacular. There are over $170,000 worth of prizes and all who donate now are also in the Tail End Bonus Drawing. Over $8,500 worth of prizes set aside just for donations made in the last weeks and received by July 31st.  Already donated earlier?  Donate again and be entered in the Tail End Drawing.  It is winner’s choice and you get more chances to win including in the Tail End.

Help keep us fighting for your freedoms. And, thank you so much for your faithful dedication to our cause!

Donate Today for a Sharper Future!

DONATE TODAY!
You Could WIN from
OVER $100,000 in
Knives, Guns & More!!
DONATE NOW for EXTRA PRIZES
in the EARLY BIRD Bonus Drawing
TWO CHANCES to WIN!