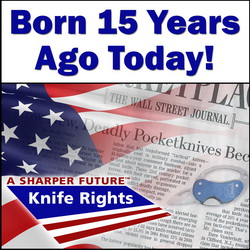 July 25, 2021: When I last reflected on the founding of Knife Rights, it was the tenth anniversary of the Wall Street Journal article that inspired me to form an advocacy organization for knife owners (see below). Now, another five years have passed and it is 15 years since that fateful day. It doesn’t quite seem like yesterday, but it also doesn’t seem like it’s been 15 years—a decade and a half! Time passes quickly when you are having fun…and kicking butt!

The author of that article can’t have foreseen all that would come as a result of that article. He clearly intended to initiate the demonization of “tactical knives” in the same manner as he and others had been demonizing and attacking so-called “assault rifles,” aiming for bans and restrictions. Not such a far-fetched idea when you consider that the opening salvo to demonize switchblades in the 1950s, resulting in the Federal Switchblade Act and multiple state bans and restrictions, began with a similarly overwrought, sensationalist and fact-challenged article, “The Toy That Kills,” in the widely read and respected Woman’s Home Companion magazine.

It not all been fun and games, and that’s to be expected when you are working to repeal laws that have been on the books for decades, or in some cases, for over 100 years. Back in 2006 I coined the trademark slogan “A Sharper Future™” to encapsulate the ultimate goal of the organization. Despite the many naysayers and many obstacles, that “sharper future” I promised has become a reality. Knife Rights’ efforts have resulted (as of January 2023) in 40 bills enacted repealing knife bans in 26 states and over 150 cities and towns, most with bipartisan support. We have also been responsible for stopping 10anti-knife bills. You can add in a number of litigation victories as well to that tally. View Knife Rights’ accomplishments at www.kniferights.org/about/accomplishments/  (For the latest total, go to: https://kniferights.org/about/accomplishments/ )

No matter how much passion I had, we could not have accomplished anything without the support of so many good people and businesses that share my vision to rewrite knife law in America. Thank you so much for your generous support. Together we are making that vision of a Sharper Future™ a reality.

I also could never have done this at all without the support of my wife, Sue. She deserves as much credit for our success as anyone.

Help celebrate a decade of Knife Rights’ unprecedented achievements by making a donation or joining to become a member.

Help keep us fighting for your freedoms. And, thank you so much for your dedication to our cause!