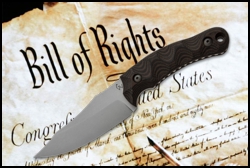 The first detailed scholarly analysis of knives and the Second Amendment has been published in the University of Michigan Journal of Law Reform (vol. 47, pages 167-215). Authored by noted Second Amendment scholars Dave Kopel, Clayton Cramer and Joe Olson, the paper makes the case for knives as “arms” protected by the Second Amendment, supporting one of Knife Rights’ foundational tenets.

Knife Rights applauds these scholars for this long-overdue effort. This is a great start on the sort of scholarly work that needs to be done to assist in potential legal cases down the road. The arguments made and supported in this article will also support our legislative efforts to roll back knife bans and oppose proposed new restrictions on knives.

Kopel writes in his blog: The Second Amendment guarantees the right to keep and bear “Arms”–not solely “firearms.” While firearms have always been the paradigmatic Second Amendment arm, there are many other types of arms which are protected by the Second Amendment. By far the most common of the other arms are knives.

The article provides an explanation of various types of knives, of criminological evidence regarding knives, and of the 19th century panic and case law about Bowie Knives and Arkansas Toothpicks. We then apply the Second Amendment to modern knife laws. We cover the utility of knives for personal self-defense and for militia use, and the constitutional significance of technological changes in knives since 1791. Finally, the article considers some modern prosecutions, statutes, and cases from Washington, Oregon, Indiana, New York, and D.C.

We conclude that even under the weakest relevant standard (intermediate scrutiny), blanket bans on the carrying of knives (or of certain types of knives, or of knives with a blade longer than a particular length) as well as bans on the home possession of some types of knives violate the Second Amendment. See the complete blog post at: http://www.volokh.com/2013/11/23/knives-second-amendment/

The complete law review article can be downloaded at: http://www.kniferights.org/Knives-and-the-Second-Amendment.pdf