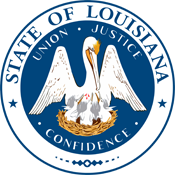 Louisiana Representative Mark Wright has introduced HB 200, Knife Rights’ bill to repeal R.S. 14:95(A)(4) which outlaws “the manufacture, ownership, possession, custody or use of any switchblade knife, spring knife or other knife or similar instrument having a blade which may be automatically unfolded or extended from a handle by the manipulation of a button, switch, latch or similar contrivance.” HB 200 also repeals the exception provided for so-called “rescue knives” which becomes redundant with repeal of the switchblade ban.

We sincerely appreciate the help and support from our friends at the Louisiana Shooting Association and their President, Dan Zelenka, in moving this bill forward.

The bill has been referred to the House Committee on Administration of Criminal Justice. We will let you know when it’s time to contact your legislator on this bill. Stay tuned.
Knife Rights’ record of 28 bills repealing knife bans at the state and local levels in 20 states in the past 8 years is unrivaled. With your support, Knife Rights is rewriting knife law in America™.