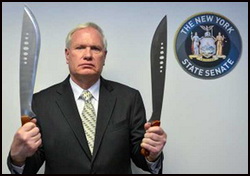 February 20, 2015: In yet another example of the sort of knee jerk, over reactive, nanny state governance that we have come to expect from New York, NY State Senator Tony Avella of Queens is proposing to ban people from possessing machetes.

The politician said Wednesday that the sale of machetes should be outlawed after several recent attacks. His bill, S03199, adds “Machete” to the same list of outlawed “Deadly Weapons” in which you will find switchblade and gravity knives. Potential penalties for violations under that section are up to a year behind bars. Sen. Avella said, “The fact that anyone can easily purchase this potentially lethal tool is just crazy,” he said, failing to recognize that this bill suggests that HIS sanity is what should be questioned.”

Even crazier, there’s no definition of a “machete” in New York law, so it would be entirely up to law enforcement and prosecutors to determine where a knife ends and a machete begins. Unfortunately, we know all too well how knife laws can be abused in New York with a history of tens of thousands of needless arrests in New York City. The legislation is the politician’s simple-minded response to the July death of Terrance Grier, age 17, who died from being slashed in the neck by a machete during a fight. In October an now identified man was seen on video slashing a victim with a machete during an argument in a Bronx restaurant.

A machete, like a kitchen knife, or any other knife, is simply a common tool used daily by many New Yorkers at home, work and recreation. It is the height of insanity to try and blame the tool for a criminal’s misuse of that tool to commit a violent crime.

Banning possession of this common tool is simply stupid. Use of any object, tool or otherwise, to commit violence on another person is already a crime in New York. Sen. Avella should withdraw his bill immediately and deal with the real problems his constituents face daily.

Knife Rights encourages you to politely let Sen. Avella know what you think of his goofy proposal and suggest that he withdraw it immediately: