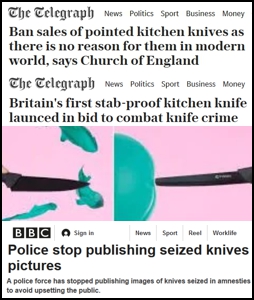 Resurrecting an inane proposal from some daft British academics made in 2005, the Church of England has demanded a ban on the sale of pointed kitchen knives, saying there is no reason for them in the modern world. As reported widely, in a letter to ministers backed by equally irrational doctors, psychiatrists, police, victims and a judge, Church of England bishops say redesigning domestic kitchen knives to give them rounded ends would combat so-called “knife crime” by making “life-threatening injuries far less likely.”

A day later UK cutlery manufacturer Rayware proudly announced that it has developed knives with rounded ends which “makes it impossible for an attacker to stab someone.” Meanwhile, the Thames Valley Police in the U.K. has advised they will no longer post photos of seized knives on social media “to help reduce the fear of knives and knife carrying in our local communities.”

If only this was The Onion, but it seems the Brits cannot help themselves. It’s Monty Python writ large. The proposal has been widely ridiculed, with good reason.

Obviously, even were they to actually ban sales of pointed kitchen knives, there would remain millions of exactly the same pointed knives in every kitchen in the country. I suppose the next step would be to require that points be ground off every knife in England, but let’s face it, even if the pointed knife police showed up at every home, that would be as pointless as the proposal to ban sales of pointed kitchen knives.

Anyone wanting to have a pointed knife for criminal purposes could quickly and easily put a point on any blunt knife. They cannot even keep shanks from being made in prison. But, perhaps with only blunt knives available for sale, there would be a run on cleavers. Because, wouldn’t you rather be attacked with a heavy cleaver?

The reality is that you cannot solve a people problem, the scourge of so-called “knife crime” in Britain, by banning inanimate objects. There are knife surrender bins all over the UK, with mindless slogans such as “Get A Life – Bin That Knife” which hasn’t slowed down the violence one iota. No surprise, that.

If the UK really wants to stop the rising tide of violence committed with knives by juveniles, young adults and gangs, it needs to address the root cause of the problem. Not holding our breath for that to happen, too easy to blame the tool. Seemingly a common tactic proposed on this side of the pond as well, unfortunately.

Knife Rights was formed in large part to ensure we didn’t end up with the draconian knife laws found in England and elsewhere, laws that accomplish nothing to stem criminal activity. 31 bills enacted in 22 states since 2010 repealing knife bans suggest we are on the right track. And, we do it with a broad spectrum of support from both sides of the aisle.

Help us avoid the sad situation in Britain. Support Knife Rights and our constitutional rights and freedoms with a donation to forge a Sharper Future for all Americans™.