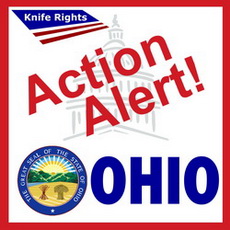 If you live, work or travel in Ohio, please use Knife Rights’ Legislative Action Center to ask Gov. DeWine to sign SB 140: https://kniferights.org/resources/congressweb/#/38

DO IT TODAY and help us get this bill done!

Knife Rights was honored to work closely with a number of Ohio legislators over the past six years to get this bill introduced and passed.

Former State Senator Joe Uecker, SB 140’s original sponsor, said, “When Knife Rights approached me about this bill, it made perfect sense to me. A completely legal item to possess should be completely legal to manufacture in Ohio. A knife should not be considered a deadly weapon unless it’s used as one. That”s just common sense.”

Uecker continued: “After four years of effort, it is clear that we’d never have gotten this done but for the simple fact that Knife Rights showed up, every time! As anyone successful in getting legislation done knows, being there, in the Capitol, at critical moments, is what makes the difference. Todd Rathner from Knife Rights did that. I sincerely appreciate that he and Knife Rights showed up every single time.”

Representative George Lang, Chairman of the Ohio House Criminal Justice Committee, said, “SB140 is just good policy. It is good for Ohio businesses and will create jobs and it is good for Ohio citizens. Decriminalizing simple possession of a knife is much needed criminal justice reform. I was proud to work with Todd from Knife Rights. He was here every step of the way, there’s no substitute for that.”

State Senator Kristina Roegner, said, “Manufacturing jobs are the lifeblood of Ohio. The fact that you cannot legally manufacture an otherwise legal product in Ohio makes no sense. This is why I co-sponsored SB140; it’s just good policy for Ohio. I’d like to thank Knife Rights for their support and hard work on SB140.”

Rick Hinderer of Hinderer Knives, said, “I was fully prepared to take the manufacturing of automatic knives to a neighboring state. Then Knife Rights stepped up to fix the law here in Ohio. I worked closely with Todd Rathner from Knife Rights and saw him in action in the Capitol. He easily worked with members from both sides of the aisle. There is no question that without his efforts at the Capitol SB140 would never have been passed. Decriminalizing knife carry was frosting on the cake that I was proud to help make happen. By showing up and doing the hard work, Todd and Knife Rights got the job done for us and all Ohioans.”

Representative Scott Wiggam, Rick Hinderer’s Representative, said, “When I was approached by a constituent who wanted to manufacture automatic knives under contract to the U.S. Government and he told me he couldn’t because of an outdated Ohio statute, I knew we had to fix it. SB140 is the right policy for Ohio and Ohioans. Thanks to Knife Rights and Todd Rathner for being here in the Capitol to make it happen.”

Knife Rights is America’s grassroots knife owners’ organization; leading the fight to Rewrite Knife Law in America™ and forging a Sharper Future for all Americans™. Knife Rights efforts have resulted in 32 bills enacted repealing knife bans in 22 states and over 100 cities and towns since 2010.