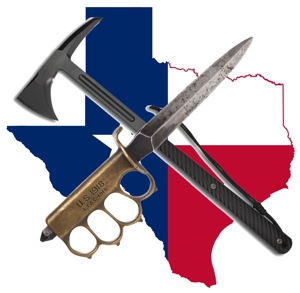 Knife Rights supported HB 446, repealing the Texas ban on carry of clubs* (including tomahawks) and possession of knuckles (including trench knives and the like), takes effect this Sunday, September 1.

NOTE: A Trench Knife, or similar, with a blade over 5.5-inches will be considered a Location Restricted Knife and is banned from carry at some specific locations.

Also taking effect Sunday is HB 3231 which strengthens the state’s preemption statute. The new law adds a provision that prevents local governments from restricting firearms and knife sales through the use of zoning and other local ordinances.

It also further clarified and strengthened the statute by adding “possession, wearing, carrying” and “storage” of firearms and knives to the state’s preemption statute.

In 2013 Knife Rights’ repeal of Texas’ switchblade ban was enacted. In 2015 Knife Rights’ signature Knife Law Preemption was enacted, nullifying all local knife ordinances more restrictive than Texas state law, including two of the “10 Worst Anti-Knife Cities in America” at the time, San Antonio and Corpus Christi. In 2017 our bill removed all of the “illegal knives” in Texas law, finally allowing Texans the right to carry a Bowie knife, dagger and others in public.

*NOTE: Besides “tomahawk,” the Texas definition of “Club” (Tex. Pen. Code § 46.01) includes a world of hurt, so to speak: an instrument that is specially designed, made, or adapted for the purpose of inflicting serious bodily injury or death by striking a person with the instrument, and includes but is not limited to the following: