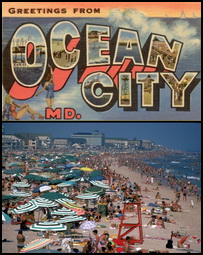 Buzzaro is quoted in the local newspaper, The Dispatch, as saying, “There is no need for this particular item (assisted opening knives)and we are requesting prohibition of it and the sale of it on the Boardwalk and throughout the town. We think it is in the best interest of public safety. We are seeing an increase in weapons on our day-to-day dealings that are a danger to all, and we believe it will better serve not having them available in town.”

Buzzaro (as well as the city council members) is apparently one of those irrational types who think that inanimate objects somehow create criminal activity. As usual, we are at a loss to understand how the manner in which a folding knife opens has any bearing on criminal activity. So-called “Fighting Knives,” which could be construed to include knives with a serrated blade, along with Butterfly Knives,”Fighting Swords” and “Fighting Axes” were previously outlawed in Ocean City, so under that logic, their crime problems should already be solved, right?

The Definitions ordinance (Sec. 58-121) defines an “assisted opening knife” as a knife which uses an “internal mechanism, such as a spring, tension spring or mechanical device to fully open the blade once the user has depressed the flipper or thumb stud attached to the blade.” That bit of ingenious legislative drafting is not quite right in terms of actual operation, but it is unlikely that any judge in the jurisdiction will care.

The Prohibited Acts ordinance (Sec. 58-123) now reads, “It shall be unlawful for any person to display, possess, sell, barter, offer to sell, distribute, manufacture, give away, transfer or dispose of an assisted opening knife, nunchaku, a fighting knife, a throwing star, a spiked wristband, a spiked fistband, a spiked glove, a flail mace, a butterfly knife, a spiked belt, a spike ring, metal knuckles, baton, fighting ax, fighting sword, pistol crossbow, or any part thereof, assembled or unassembled. As used herein, “person” includes individual, partnership, corporation or any other entity. The prohibitions relative to assisted opening knife and baton do not apply to officers of the Ocean City Police Department, The Maryland State Police, the Natural Resources Police, the Worcester County Sheriff’s Department and any allied police department providing assistance in Ocean City. The prohibition relative to assisted opening knife does not apply to members of the Ocean City Fire Department and EMS, while on duty.”

It is a misdemeanor subject to a fine of up to $1,000 or imprisonment of up to six months or both.

Maryland is an interesting state with regards to its knife laws. It has no state prohibition on any type of knife possession or any knife carried openly (except for minors or “with the intent or purpose of injuring an individual in unlawful manner” – a vague standard subject to abuse). However, only “a penknife without a switchblade” can be carried concealed. Without Knife Law Preemption, however, cities are free to enact their own ordinances more restrictive than state law. So, to add to the Bizarre-O situation in Ocean City, it appears you would be legal to walk down the Boardwalk with an automatic knife carried openly, but not an assisted-opening knife.

Just to make things more interesting in Ocean City, their ridiculously drafted ordinance makes it both illegal to possess and illegal to dispose of the named prohibited items. So, anyone in Ocean City who already owns an assisted-opening folder, and there are no doubt many who do as they are one of the most popular folders types on the market, cannot avoid breaking the law in Ocean City. So, while their irrational ordinance was passed in a vain and ultimately useless attempt to control access to these items by the hoards that visit their Boardwalk, get drunk and cause trouble, they have set up a Catch 22 for those few residents who might actually try to abide by the ordinance. No doubt those who visit Ocean City will abide by this ordinance in the same manner that they abide by their public drunkenness ordinance.

This situation in Ocean City is exactly why Knife Rights’ priority legislative goal is passage of Knife Law Preemption. Knife Law Preemption prevents local jurisdictions from enacting any law or ordinance more restrictive than state law. It eliminates and prevents a patchwork of local restrictions that serve only to trap unwary citizens.