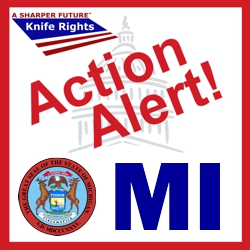 Our Michigan Knife Rights Act, HB 4066, that would enact Knife Rights’ signature Knife Law Preemption in the state, has been presented to Governor Whitmer.

ACT NOW! If you are a Michigan resident, or work or travel in the state, please use Knife Rights’ Legislative Action Center to ask Governor Whitmer to sign HB 4066: https://kniferights.org/resources/congressweb/#/48

Please use the Tell-A-Friend feature available through Knife Rights’ Legislative Action Center after you send the Governor your email. The more emails we generate, the better. DO IT TODAY!

Knife Law Preemption is a Knife Rights’ criminal justice reform effort that nullifies existing ordinances and prevents new local ordinances more restrictive than state law which only serve to confuse or entrap law-abiding citizens traveling within or through the state. Preemption ensures citizens can expect consistent enforcement of state knife laws everywhere within a state.