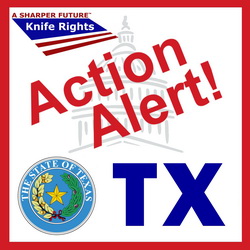 Knife Rights’ Texas Knife Law Reform Bill, HB 956, is set for a vote Monday, April 26th, on the floor of the House. Thanks for the hundreds of emails you sent to members of the House Calendars Committee. Now we need to do it again for the floor vote.

HB 956 would remove from statute a number of places where Location-Restricted Knives (having blades over 5 1/2 inches) are banned, including restaurants and bars that derive 51% of their income from sale or service of alcoholic beverages, amusement parks and places of religious worship.

If you are a Texas resident, use Knife Rights’ Legislative Action Center to EMAIL your Representative and ask them to vote YES on HB 956: https://kniferights.org/resources/congressweb/#/44