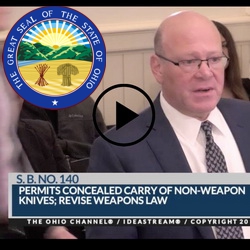 2. Clearing up the confusion in Ohio law with regards to carrying ANY knife by defining a knife, razor or cutting instrument as a “deadly weapon” or “weapon” ONLY if it is used as a weapon. This will clearly allow carrying any knife concealed in Ohio.

ACLU of Ohio’s Gary Daniels’ testimony strongly supported the bill. His deep understanding of Ohio’s criminal code allowed him to authoritatively answer all the questions posed by committee members. We are grateful to him and the ACLU of Ohio for dedicating the time and effort this took. Gary emphasized that Ohio’s knife laws, including case law, are contradictory and confusing.

Our good friend Rick Hinderer of Rick Hinderer Knives, who manufactures his knives in Ohio, did a great job explaining to the committee why this bill is important to creating jobs and increasing tax revenues to the state. He talked about how he has been approached for military and law enforcement contracts to produce switchblades, but can’t even bid on those contracts because of Ohio’s prohibition on manufacture and sale of switchblades. He also testified that he will be forced to manufacture in another state in order to compete for contracts.

Click here to view the video of the testimony. It is quite entertaining at times. ACLU’s testimony begins at 10:25 minutes, Rick Hinderer at 28:38 and Knife Rights’ Todd Rathner at 36:10. 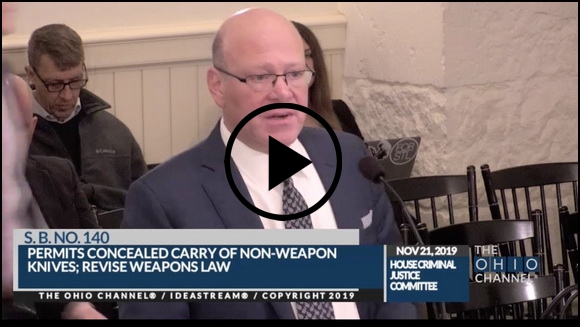 Our efforts in Ohio will continue. SB 140 will likely receive at least one further hearing before the committee votes. It is impossible to predict when that will be, but we will keep you apprised. We appreciate greatly the support of AKTI, ACLU and CSF as we all work together to move Senate Bill 140 across the finish line.