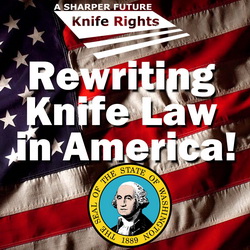 A bipartisan “Spring Blade” Ban Repeal bill, HB 1224, has been introduced by Washington State Representatives Kelly Chambers and Mike Chapman. HB 1224 would repeal the ban on sales and civilian possession of “spring blade” knives, as well as specifically exclude them from the definition of “dangerous weapon.”

HB 1224 is identical to the bill that passed the Senate last year, but which never received a floor vote in the House before time expired.

As Mike Vellekamp of V Nives, Knife Rights’ 2012 Freedom’s Point Award winner, said last year, “I think it’s time for Washington State to catch up with our neighboring states, and the other states in the union, that already allow for the possession, and sales of these useful tools, and this bill will also create new jobs and tax revenues for Washington.”

Knife Rights will let you know when it is appropriate to engage your legislator to support HB 1224.

Knife Rights is America’s grassroots knife owners’ organization; Rewriting Knife Law in America™ and forging a Sharper Future for all Americans™. Knife Rights efforts have resulted in 33 bills enacted repealing knife bans in 23 states and over one hundred cities and towns since 2010, as well as numerous litigation victories.