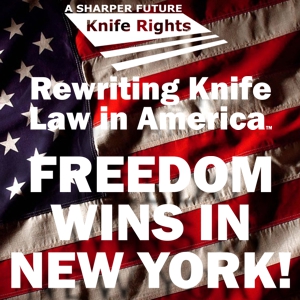 The repeal is effective immediately.

Unfortunately, this is unlikely to be the end of knife owners being harassed by the New York Police Department.  READ OUR WARNINGS BELOW on why knife owners in New York and especially in New York City need to still be careful about what knife they carry going forward and how they carry it in NYC.

Knife Rights Chairman Doug Ritter said, “After nine years fighting, it is a relief to close the book on this extraordinary abuse of authority by a corrupt system that has terrorized over 70,000 honest, law-abiding people, disproportionately minorities, for simply carrying a common tool used daily in their lives. I am thrilled that we and our partners across the political spectrum in this fight have finally prevailed, but it is a sad commentary on the state of politics and justice in New York State, New York City and at the Second Circuit that it took this long and that tens of thousands of innocent folks had to suffer so much for so long.”

“This is a big win for Knife Rights, the people of New York, and for the sponsors who tenaciously fought to get these injustices stopped. I am very proud to have worked with them on the ground in Albany as we fought so long to get this done,” said Rathner. Knife Rights congratulates our longtime legislative allies in this effort, sponsors Assemblymember Dan Quart and Senator Diane Savino, as well as Senator Robert Jackson, for gaining unanimous approval of this bill this time around and for helping to assemble the coalition of diverse organizations and politicians who urged Cuomo to sign the bill after two previous vetoes of similar overwhelmingly passed bills.

“No stage hand, no plumber, no maintenance worker, no office worker, no New Yorker should have to risk their freedom to carry a tool because of a vaguely worded 1950’s era statute,” said Assemblymember Dan Quart. “I’m proud to have been a part of this unlikely and diverse coalition that included public defenders, union members, criminal justice reform advocates and Knife Rights. Knife Rights’ tenacious 9-year fight in Federal court against this unjust and unconstitutional enforcement scheme proved an important element in this struggle.”

We are very thankful for the support of our friends at The Legal Aid Society who have been on the front lines in this fight.

We’d also like to credit journalist Jon Campbell whose series of articles starting in 2014 in the Village Voice publicized these abuses and helped immeasurably to catalyze public support for a solution. Also credit to VICE News who more recently highlighted this issue and Knife Rights’ efforts to solve it to a broad audience, further arousing opposition to this abuse.

Unfortunately, this is unlikely to be the end of knife owners being harassed by the New York Police Department.  READ OUR WARNINGS BELOW on why knife owners in New York and especially in New York City need to still be careful about what knife they carry going forward and how they carry it in NYC.

Cuomo’s action on this bill came as briefing was completed in Knife Rights’ appeal of its federal civil rights case on these gravity knife arrests to the Supreme Court of the United States. With a strong case including a 4 to 1 circuit split against the Second Circuit on an important constitutional issue, three strong amicus briefs from across the political spectrum and, just recently, feeble and obfuscatory opposition briefs from NYC and DA, the possibility of Knife Rights’ case being heard increased significantly.

A conference to decide whether to take up this case is currently scheduled for June 13th.

A decision in favor of the plaintiffs against the City and DA Vance in our case would make it much harder for the Second Circuit to abuse the issue of vagueness, as they have in our case, to make other cases opposed by these politicians go away, again, as they have also done previously. That possibility was so concerning that even DA Vance, who previously steadfastly opposed any reasonable solution and who is a close confidant of Gov. Cuomo, reversed his prior opposition to the Governor signing any bill that would stop his abuse.

As cited in the Governor’s signing statement, it didn’t hurt that in another case recently a Federal Judge in New York issued a very narrow ruling saying that the City’s “wrist flick” test was, indeed, unconstitutional, although in limited circumstances that did not substantially impact the ability of the City and DA to continue the arrests and prosecutions. That case relied heavily on the briefs in our case. But, despite its serious limitations and the fact that NYC and Vance were working around it, that decision provided some public cover for Cuomo and Vance without revealing their real fear, losing at the Supreme Court in our case. They hope the signing of this bill will moot our case.

Even better for Vance, if they don’t lose to us in court, Vance won’t be forced to pay our million dollar legal bills for eight years of Federal litigation, which he’d consider doubly painful on top of the embarrassing loss he’s facing. (This is also painfully illustrative, by the way, as to why we oppose the Interstate Transport Act (S.542) in the U.S. Senate because is leaves individuals and other open to similar financial abuse while providing the appearance of solving a problem that it does not adequately accomplish.)

NOTE: The repeal also applies to true gravity knives, such as the German Paratrooper Knife that we demonstrated in Federal Court. Please note the WARNING below as to New York City. In particular, some of these aforementioned true gravity knives have blades that are 4-inches or longer and would not be legal in NYC.

Knife Rights recommends that you never carry your knife clipped to your pocket in New York City. If you plan to carry a folding knife in New York City, we suggest that if it has a pocket clip, you should remove it so you don’t inadvertently clip it to your pocket after use. Even when covered by a jacket, simply moving the jacket aside to get to a wallet has been enough to get folks stopped. Always ensure your knife is completely concealed at all times, including not “printing” on the outside of your clothing. In addition, be extremely circumspect about using a knife for any purpose in a public setting. Knife Rights suggests that you never carry a knife with a 4-inch or longer blade in NYC.

NOTE: While there is nothing in the Administrative Code compelling or allowing seizure of the knife in question, invariably the knife will be taken by the officer and chances of it being returned are very low. In cases where it has been returned is has taken months of effort and often use of an attorney. Knife Rights  recommends that you never carry a valuable knife in NYC or one you would not want to lose.  Knife Rights strongly suggests that you not resist the officer seizing your knife as that can lead to more serious legal complications.

For more information on what to do when stopped or arrested: https://kniferights.org/if-arrested/

On June 10, 2018, the highest court in New York State upheld the conviction of an individual in possession of an assisted-opening (spring-assisted) folding knife that he used in his work under the theory that it was an illegal switchblade knife under New York law. Essentially, this decision redefined what a switchblade is under New York State law to include assisted opening (spring-assisted) knives. This decision applies to the entire state, not just New York City.  The New York Police Department and DA Vance have since been prosecuting those caught with assisted-opening knives as having illegal switchblades. Knife Rights recommends that you do not carry an assisted-opening knife in New York.

Knife Rights is Rewriting Knife Law in America!™ with your help.  31 bills enacted in 22 states since 2010! Support Knife Rights’ efforts to Forge a Sharper Future™ with a donation in the Ultimate Steel™ Spectacular and get a chance to WIN from OVER $150,000 in Custom Knives, Guns & More!  www.UltimateSteel.org