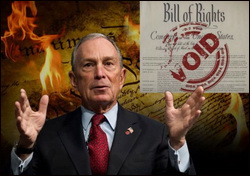 (Updated Nov. 23, 2019) Last week, Michael Bloomberg, former Republican mayor of New York City, now a declared Democratic presidential candidate, apologized for the unconstitutional “stop and frisk” policy in New York City whose inception he supported and then had enforced by his police department. For knife owners, especially the tens of thousands who were targeted by his police department, the apology rings hollow.

While he thinks now that he “got something important really wrong” back then, he was all too happy to brag about all the “weapons” that police seized and the “weapons” arrests made by his police department during “stop and frisk.” Nothing has changed in that he still believes “weapons” are the problem, not criminals, that our tools are weapons first and we ought not be able to carry them. The reality is that 95% of those “weapons” were common folding knives, everyday tools carried by innocent people who found themselves shafted by Bloomberg’s abuse of the state’s now-repealed gravity knife ban.

He also seems to have overlooked how after “stop and frisk” was finally declared unconstitutional, it morphed immediately into “stop and flick” by his police department. Knife carriers continued to be arrested by the thousands, 85% of whom were minorities, similar to “stop and frisk” before it was forced to end! The only difference was that Bloomberg’s cops needed an excuse to stop someone, such as a knife clipped to a pocket or printing through their clothes, or even just using one as a tool in public.

Thankfully, our efforts in Federal court over eight years and the legislature for over five years largely put an end to these injustices this past summer with the repeal of the ban on gravity knives in New York. But, not until over 70,000 innocent people were arrested and prosecuted, again, 85% minorities, with a significant number sentenced to jail on trumped-up felony charges because they had some prior conviction, often decades prior.

We’re not holding our breath for a true apology, or any change of heart, from the hypocritical, Bill of Rights-hating Michael Bloomberg.

The Fight Isn’t Over! DA Vance is at it Again!

Legal expenses continue. Please make a TAX-DEDUCTIBLE contribution to support our legal fight against this abuse of government power.