The first hearing on Knife Rights’ Ohio Knife Law Preemption bill, HB 243, was held Thursday, June 17. The Government Oversight Committee sponsor’s hearing is the first of three hearings to be held on this bill. Sponsor Representative Al Cutrona introduced the bill and answered questions from committee members. Knife Rights Director of Legislative Affairs, Todd Rathner, had been in Ohio the week prior lobbying for this bill and its companion Senate bill, SB 156. 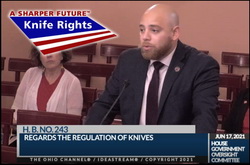 Knife Rights will let you know when it is time to contact your legislators to support HB 243.

Knife Rights is America’s grassroots knife owners’ organization; leading the fight to Rewrite Knife Law in America™ and forging a Sharper Future for all Americans™. Knife Rights efforts have resulted in 33 bills enacted repealing knife bans in 23 states and over 150 cities and towns since 2010.