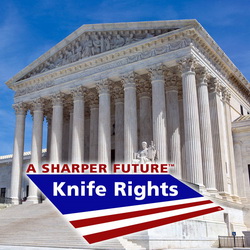 Knife Rights Foundation has joined with FPC American Victory Fund and a number of state Second Amendment advocacy groups submitting an Amicus Curie (Friend of the Court) brief to the Supreme Court of the United States in a critical Second Amendment case, New York State Rifle & Pistol Association, Inc. v. Bruen. This is the first Second Amendment case to be heard by SCOTUS in over a decade. Both that case, McDonald v City of Chicago, and the preceding 2A case, District of Columbia v. Heller, included discussion of knives as “arms” in the majority opinions.

The key issue in the case revolves around whether the Second Amendment protects the right to bear a handgun in public for purposes of self-defense. New York City’s so-called “proper cause” permitting law and how it is arbitrarily administered makes it almost impossible to get a concealed carry permit. Since the Second Amendment says ‘arms,’ not ‘firearms,’ the decision in this case will be significant for the rights of knife carriers as well.

While the majority of knife carriers don’t carry a knife primarily for self-defense, some do, and sometimes that edged tool ends up being used for self-defense in extremis. We owe it to our members and supporters to do what we can to support their right to carry. (Read the law review article “Knives and the Second Amendment.”)

Forty three amicus briefs have been filed in support of the Petitioners and the Second Amendment, representing 343 amici (organizations, states, members of Congress and individuals). These amicus briefs provide the Justices additional supplemental or expansive information about many aspects of the case. This coalition brief in support of Petitioners’ provides a detailed historical perspective on the right to carry for self-defense.

Submitted by historian and constitutional scholar David T. Hardy, the brief argues that nineteenth-century state constitutions equated the term ‘bear arms’ with ‘carry arms for self-defense’; antebellum and post-Civil War case law confirm the original public understanding of the Second and Fourteenth Amendments; restrictions from the old west do not inform the Second Amendment’s original meaning; and that carrying arms for self-defense was common and known to the framing generations of 1791 and 1868.

“State constitutions from 1776 to 1868 demonstrate unequivocally that ‘bear arms’ was used to describe carrying arms for individual self-defense. Whatever the most common use of ‘bear arms’ was in ordinary speech, in constitutional enactments, ‘bear arms’ was universally understood as protecting defensive carry of ordinary arms,” the brief says. “History and tradition confirm this. Nineteenth-century carry restrictions, and the cases adjudicating their constitutionality, reflect an understanding that” governments “must allow ordinary citizens to carry arms for self-defense-bans on both open and concealed carry were largely invalidated.”

Self-defense, and having the effective means by which a person defends themselves and their loved ones, is one of the most basic of natural human rights. This will be a historic decision at a time when some would like to see the Second Amendment diminished to a second-rate right, at best, taking away one of the most important rights guaranteed by the Constitution. We must stand strong defending this right. We appreciate the support from our friends at FPC American Victory Fund and all the others groups that supported this effort.

Knife Rights Foundation, Inc. (www.KnifeRights.org) is a 501(c)(3) non-profit organization that serves its members and the public, focused on protecting the rights of knife owners to keep and carry knives and edged arms, including for self-defense. The purposes of the Knife Rights Foundation include the promotion of education regarding state and federal knife laws (including publication of Knife Rights’ LegalBlade App – Knife Laws in America), and the defense and protection of the civil rights of knife owners nationwide.