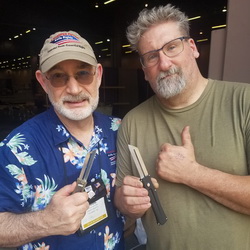 After receiving numerous inquires about the changes in New York law as a result of the enactment of A5944 repealing the state’s gravity knife ban, a few comments, cautions and further clarification on one point of law:

As far as Federal law is concerned, gravity knives are treated exactly the same as switchblades and interstate commerce is governed by the Federal Switchblade Act. Review an annotated copy of the FSA here: https://kniferights.org/resources/federal-switchblade-act/

While the ban on true gravity knives has been repealed in New York, except on MTA subways and buses, those traveling through New Jersey’s Newark airport enroute to New York City should note that they remain illegal in New Jersey and it is a felony crime! For that matter, traveling by any means with a gravity knife through New Jersey is illegal. Pennsylvania has an exemption for them as a “curio,” but do you really want to deal with convincing a judge of the knife being a “curio” after being thrown in jail? You may want to avoid traveling with your gravity knife through Pennsylvania as well.

Knife Rights’ Knife Owners’ Protection Act in Congress would protect such travels between jurisdictions where any particular knife is legal. It includes a strong civil Right of Action that would serve to dissuade anti-knife jurisdictions from messing with you, unlike the watered-down Interstate Transport Act, another bill in Congress. Unfortunately, the protections the ITA theoretically offers are mostly an illusion. In reality, the ITA will lead to abuse where a knife owner most needs protection. Click here for more about the serious problem with the ITA.

A reminder, again, to folks who live in, or travel to, New York City. NYC administrative code has an under-4-inch blade length limit and requires knives be carried COMPLETELY concealed. Knife Rights recommends that you never carry your knife clipped to your pocket in the City. If you plan to carry a folding knife in the City, we suggest that if it has a pocket clip, you should remove it so you don’t inadvertently clip it to your pocket after use. Even when covered by a jacket, simply moving the jacket aside to get to a wallet has been enough to get folks violated. Always ensure your knife is completely concealed at all times, including not “printing” on the outside of your clothing. In addition, be extremely circumspect about using a knife for any purpose in a public setting. Finally, a reminder that assisted-opening knives may be considered illegal switchblades in New York state under a recent court ruling with severe penalties if convicted. If treated as a switchblade, they may be possessed for use while hunting, trapping or fishing or en-route to or from those activities by a person with a valid hunting, trapping or fishing license.

Our initial post about the denial of Cert by SCOTUS included an explanation of why we think that people who find themselves charged with gravity knife possession in the MTA subways or buses under circumstances where the officer used the “wrist flick test” should consider asking their attorney to argue “judicial estoppel” as part of any defense. In their desperate effort to moot the case, New York City’s NYPD disavowed further use of the vague “wrist-flick-test.” Somehow the complete quote from the City’s and DA’s “mootness brief” was abridged and is included here in full for future reference.

“Pointing to a statement of a New York City Police Department (NYPD) spokesperson, petitioners incorrectly suggest that the NYPD will continue to use the ‘wrist-flick test’ and the definition of a ‘gravity knife’ under N.Y. Penal Law § 265.00(5) to specifically target possession of gravity knives in the subways. But neither point is true. Following the repeal, the NYPD has renounced reliance on the ‘wrist-flick test’ on which petitioners’ constitutional challenge has hinged.”

“…the NYPD does not intend to use the wrist-flick test in enforcing the MTA regulations. Counsel for respondents have been informed by the NYPD, and have been authorized to inform the Court, that the NYPD determined after repeal of the gravity-knife statute that New York City police officers will no longer be trained on, or authorized to use, the wrist-flick test to identify an illegal gravity knife. The NYPD will thus enforce the prohibition of weapons or other dangerous instruments on public transit under t he MTA regulations without reference to whether the weapon constitutes a “gravity knife” as defined under N.Y. Penal Law § 265.00(5) and without reference to the wrist-flick test.”

Knife Rights is Rewriting Knife Law in America!™ with your help. 31 bills enacted in 22 states since 2010! Support Knife Rights’ efforts to Forge a Sharper Future™ with a donation in the Ultimate Steel™ Spectacular and get a chance to WIN from OVER $160,000 in Custom Knives, Guns & More! Thousands of Dollars of TAIL END BONUS Prizes Received at BLADE Show are being added. DONATE NOW to ALSO get in the TAIL END BONUS DRAWING! www.UltimateSteel.org