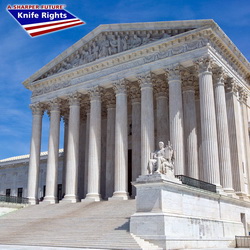 Knife Rights Foundation signed on to an Amicus Curiae (Friend of the Court) brief supporting the plaintiff, NYSRPA.

While the case obviously involves firearms, the implications of the Court’s decision will reverberate throughout the Second Amendment community, including for those who carry knives in public for self-defense. This is why Knife Rights Foundation is an amicus in this case.

You can listen to the nearly two hours of oral argument at:   https://www.supremecourt.gov/oral_arguments/audio/2021/20-843

You can read the transcript at:  https://www.supremecourt.gov/oral_arguments/argument_transcripts/2021/20-843_f2q3.pdf

OR, you can listen to some of the best legal minds in the Second Amendment litigation community discuss the oral argument and predict the outcome on video at https://youtu.be/blfYFDtVoNk  If you speed it up at 1.5 times, it takes about 15 minutes.

Bottom line, reading SCOTUS tea leaves is not anything close to a sure thing, but based on this and other articles, it is expected to likely be a 6-3 decision in favor of 2A rights because Chief Justice Roberts will not want to allow Justice Thomas to determine who writes the opinion, which might likely be broader than Roberts would prefer. The case has already forced N.Y. and the U.S. to concede that there is a right to bear arms outside the home. That’s a huge victory, but…

Having crossed that long-running controversy off, now the issue becomes how they’d prefer to still convince the court to narrow that right down as much as they can so they can still exert significant “control” who gets a permit in their jurisdictions. This is the “shall issue” (meaning, generally, that the state must issue a license to carry except to prohibited persons) versus NY’s “may issue” law that’s central to the case.

The most meaningful issues are these:

First is scrutiny or how future cases will be decided based on the results of this case. Any sort of intermediate scrutiny is going the leave the door open for all sorts of mischief by anti-gun jurisdictions (see link below relating to that to a degree). Strict scrutiny, like other constitutional rights require, allows very few exceptions. There must be a “compelling governmental interest” and they must narrowly tailored the law to achieve that interest. A strong opinion based, alternatively, on text, history and tradition, like with the Heller decision, would be another very strong result; one many 2A litigators would prefer.

Second, how narrow or broad an opinion do they provide with regards to the right to bear arms outside the home? What exceptions are allowed in regards to the “sensitive places” (schools, government buildings, etc.) limits from the original Heller decision that affirmed that the Second Amendment is an individual right?  Will they further define that or simply affirm it as it stands in passing?  Review this article for a better understanding of this issue: https://reason.com/volokh/2021/11/08/the-sensitive-places-issue-in-new-york-rifle/

SCOTUS has a bad habit of narrow opinions that leave a mess, and decades of litigation, in their wake. The broader the decision protecting the right to bear arms outside the home, including either strict scrutiny or a strong text, history and tradition based opinion, the better protected is our right to carry, including knives.

A decision is not expected until June, 2022.