Texas Senator Drew Springer has introduced Senate Concurrent Resolution SCR7 that would designate the Bowie Knife as the official state knife of Texas. This is a companion resolution to the original he filed in the House, HCR1, as a Representative, prior to moving to the Senate.

This is a corrected version of HCR 86 that passed with bipartisan support in 2019, but which Governor Abbott vetoed because it contained an obvious historical error.

At the time, Gov. Abbott said, ““This is the kind of resolution that a Texas Governor would sign without thinking,” Abbott said in his official veto statement. “So, as a thinking Governor, I think it best not to sign a factually incorrect resolution and instead to allow the Legislature to consider this next session.”

Abbott’s statement continued, “Fortunately, with a little thinking and study, it was learned that a statement contained in the resolution is factually incorrect: it identifies the location of Jim Bowie’s ‘Sandbar Fight’ as ‘near Natchez, Louisiana,’ when in fact the fight occurred near Natchez, Mississippi.” 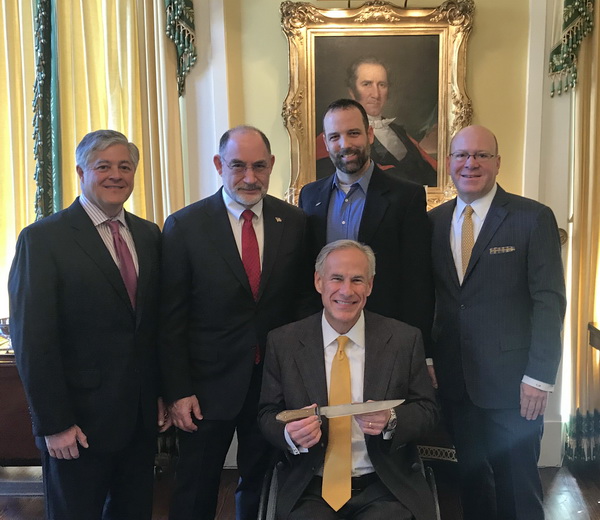 Gov. Abbott has some familiarity with Bowie knives. To recognize his signing of our bill in 2017 that made it legal to carry a Bowie knife in Texas, we had the honor of presenting the Governor with a very special Texas Heritage Bowie forged by Texas knifemaker Jason Fry, a sixth generation Texan.

This resolution is again expected to move with bipartisan support. Knife Rights will let you know as soon as it is appropriate to contact your Texas lawmakers to support this bill.

Knife Rights is America’s grassroots knife owners’ organization; Rewriting Knife Law in America™ and forging a Sharper Future for all Americans™. Knife Rights efforts have resulted in 33 bills enacted repealing knife bans in 23 states and over one hundred cities and towns since 2010, as well as numerous litigation victories.