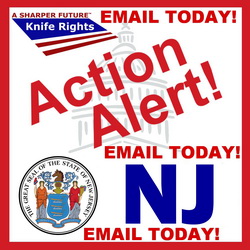 Carry an otherwise legal pocket knife in New Jersey and become a felon! If you live or work in New Jersey, please email your legislators today: Links at the end of this article.

The expected knee-jerk responses by anti-gun rights states and cities to the U.S. Supreme Court’s recent Bruen decision upholding the right to carry “arms” for self-defense continues as New Jersey tries to one-up New York and California. All of these new laws and regulations blatantly flaunt the very clear limitations from the Bruen opinion (reaffirming Heller before it). Many of the newly enacted restrictions in New York were recently stopped dead by injunctions issued by federal district courts for the virulently anti-gun Second Circuit.

Despite this, in another doomed effort to strangle gun carry rights clearly acknowledged by Bruen, New Jersey’s anti-Bruen bills (Amended A4769 with a separate “explanation” and S3214 including “explanation”) are being rammed through the General Assembly and Senate, doubling down on New York’s already enjoined unconstitutional statutes while also sweeping knives, and all other “weapons,” in with their inane and unenforceable attack on firearm carry.

How New Jersey thinks that including knives and other commonly carried tools and sports equipment in these bills is a good idea is beyond us. But, it’s New Jersey and they just can’t stand being second worst to New York and California and they have never thought they needed to abide by the Bill of Rights.

As we note often, the Second Amendment doesn’t say “firearms,” it says “arms.”  While used as a basic tool 99.9% of the time, a knife is also an “arm” that can be used for self-defense.  Whatever limits the Supreme Courts places on firearm possession and carry restrictions, would also limit what can be done to restrict other “arms” in common use by law-abiding citizens for self-defense, including knife possession and carry.

As described in the introduction, “(u)nder the bill, it would be a third-degree crime to carry any firearm or weapon in the following locations” which is then followed by a lengthy list. Besides the per se illegal knives listed under New Jersey “weapon” definition (gravity knife, switchblade knife, dagger, dirk, stiletto.), New Jersey law also defines “weapon” as “anything readily capable of lethal use or of inflicting serious bodily injury…” This, of course, includes ordinary knives and many commonly used tools and sports equipment. It doesn’t actually have to be used lethally or to inflict serious injury – it only has to be CAPABLE of that to qualify as a “weapon.” As you can imagine, this is a wide open door to abuse by law enforcement and prosecutors.

The bill also provides that municipalities that ban guns would also be allowed to invent their own unique and inconsistent rules banning knife carry. Which codifies in part the already existing circumstances in New Jersey where crossing a line on a map can make you a criminal.

A “third-degree crime” (Crime of the Third Degree) in New Jersey carries a sentence of three to five years’ imprisonment, with a four-year presumptive sentence. If convicted, that is a felony level conviction that will result in loss of civil rights including the right to vote or to possess a firearm. Based on our unfortunate experience with New York City, enforcement of this new law would almost certainly disproportionately affect persons of color carrying knives for innocent purposes. That is definitely not the Criminal Justice Reform that the left claims to support (which they do when they have supported the majority of our bills to repeal knife bans).

This automatically creates a situation where those charged will likely accept a plea deal which may still end up with jail time, but avoids a felony. They would still end up with a criminal record and ANY other misdemeanor crime prosecution, even years hence, can often be upgraded to a felony, in some cases it is automatic. We saw this happen time and again in New York City when they arrested and prosecuted over 70,000 innocent people for carrying common folding knives they claimed were illegal gravity knives. Many with a decades-old misdemeanor criminal record were prosecuted on felony charges and ended up serving significant jail time.

Here are a few examples (of many) of how this idiotic law would affect individuals in New Jersey. Bear in mind that while our focus is on knives, many other common tools that could be deemed weapons are also covered and these are only some of the issues and locations:

While we would prefer to see these unconstitutional bills killed, it being New Jersey that’s as likely as stopping the sun from rising. Knife Rights is working with our associates and friends in New Jersey to get the language amended as the Senate works on its bill so that it doesn’t adversely impact knife and tool carriers and users. That is, at least, something that could happen.

To email your NJ Assemblyperson go to:  https://kniferights.org/resources/congressweb/#/53

To email members of the Senate Committee go to: https://kniferights.org/resources/congressweb/#/54