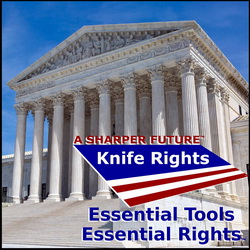 Knife Rights is celebrating Thursday’s opinion by the Supreme Court of the United States affirming that the right to bear arms, which includes knives, exists outside the home. Moreover, that the states cannot unreasonably restrict this right to the point of effectively denying it to the majority of law-abiding persons.

Knife Rights Chairman Doug Ritter said, “This is a huge win for the Second Amendment community and knife owners. The two pillars upon which Knife Rights stands are “Essential Tools – Essential Rights.” We cannot fully retain the former without the latter. This decision by the Supreme Court significantly bolsters the latter and knife owner rights.”

Knife Rights Foundation signed on to an Amicus Curiae (Friend of the Court) brief with FPC American Victory Fund and a number of state Second Amendment advocacy groups supporting the plaintiff in this case, New York State Rifle & Pistol Association.

While the case obviously involved firearms, the implications of the Court’s decision will reverberate throughout the Second Amendment community, including for those who carry knives in public for self-defense. This is why Knife Rights Foundation was an amicus in this case.

While the majority of knife carriers don’t carry a knife primarily for self-defense, some do, and sometimes that edged tool ends up being used for self-defense in extremis. (Read the law review article “Knives and the Second Amendment.”)