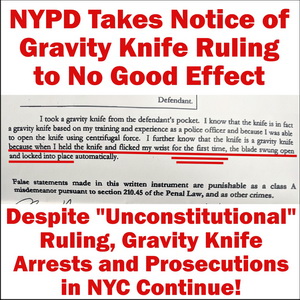 As we previously reported, New York City’s abuse of the state gravity knife ban to unconstitutionally arrest tens of thousands of innocent knife owners took a hit in a Federal District Court ruling last week when Judge Paul A. Crotty issued a narrow ruling finding the state’s gravity knife law to be unconstitutionally void for vagueness as applied to the plaintiff’s circumstances.

At the time we posted this WARNING which we reiterate here: At this time, nobody should take this decision as changing anything of substance in New York City with regards to their persecution of knife owners carrying common folding knives.

Just a few days later our friends in New York City report that New York Police Department officers have already taken notice of the ruling and have amended their standard “complaint” verbiage to take the ruling into account:

The case, Cracco v. Vance narrowly focused on the question of how many attempts it took the arresting officer to succeed in “wrist flicking” open Joseph Cracco’s Spyderco Endura. It was alleged that it took five tries, although the DA denied this assertion. Cracco sought a ruling that the statute could not be constitutionally applied to him if it took more than one or two attempts to open the blade using the “wrist flick test.”

The judge agreed with the plaintiff in that regard and ruled that the statute is unconstitutional as applied to a knife that cannot be flicked opened on the first or second attempt. The case and the judge’s decision relied heavily on elements developed in our own long-running Federal civil rights case against the City and DA.As expected, the NYPD have adjusted to the ruling, as shown in the Complaint above, in order to continue their arrests and the DA will be quite willing to prosecute the knife owner.

WARNING: At this time, nobody should take this decision as changing anything of substance in New York City with regards to their persecution of knife owners carrying common folding knives.

We caution knife owners in New York City to be wary. Moreover, we’d like to remind New Yorkers and those traveling to and through the City, that besides this whole Gravity Knife issue, the city has its own ordinances regarding knives, including that you must carry 100% concealed. Clipping a knife to your pocket is asking for trouble in New York City. Click for full details.

Meanwhile, Knife Rights’ federal civil rights case that is attempting to rid the city entirely of its infamous “wrist flick test” is on petition to the U.S. Supreme Court  Three strong amicus briefs have been filed and the Court has directed the City and DA Vance to respond to plaintiff’s petition for Writ of Certiorari.

In addition, our friends in the New York legislature have bills in motion to again attempt to put an end to this abuse in New York City.