Named in honor of President Trump’s election victory that secured the future of the Second Amendment, Knife Rights Founder and Chairman Doug Ritter noted he was, “thrilled to affirm our commitment to our shared goal of preserving the Second Amendment for future generations in such a spectacular fashion.” Referencing the dramatic rope-cutting demonstration on stage just prior to the bidding’s start, he quipped, in the understatement of the evening, “not too bad for a slightly used knife.”

Mark Zalesky, editor of Knife Magazine, noted that, “as far as I can recall, this is an all time record price for a handmade knife at a public auction. Congratulations to Knife Rights, J.R. Cook and Barry Lee Hands.”

Knives donated by Knife Rights have helped raise a quarter of a million dollars for the NRA in the past 6 years.

But, Knife Rights still has to raise its own funds to continue its unprecedented string of 30 legislative victories in the past seven and a half years and with a DONATION TODAY you could win YOUR CHOICE from OVER $200,000 in PRIZES in the Ultimate Steel™ Knives, Guns & More Spectacular. With custom knives valued to $15,000, firearm prizes including optics and suppressors valued to $4,663, celebrity signed knives, an African Safari and a multitude of other extraordinary prizes, there’s no better time to donate to support Knife Rights.

Donate by May 15 and you are also entered into the Early Bird Drawing featuring production and mid-tech knives with values to $685, pistols valued to $650 and an assortment of cool gear totaling over $30,000 with no prize valued at less than $150. Donate at specified levels and get FREE donation bonus knives from SOG, ESEE, Colonial Knife, Cold Steel and Hogue. Check out all the prizes and DONATE TODAY at: www.UltimateSteel.org 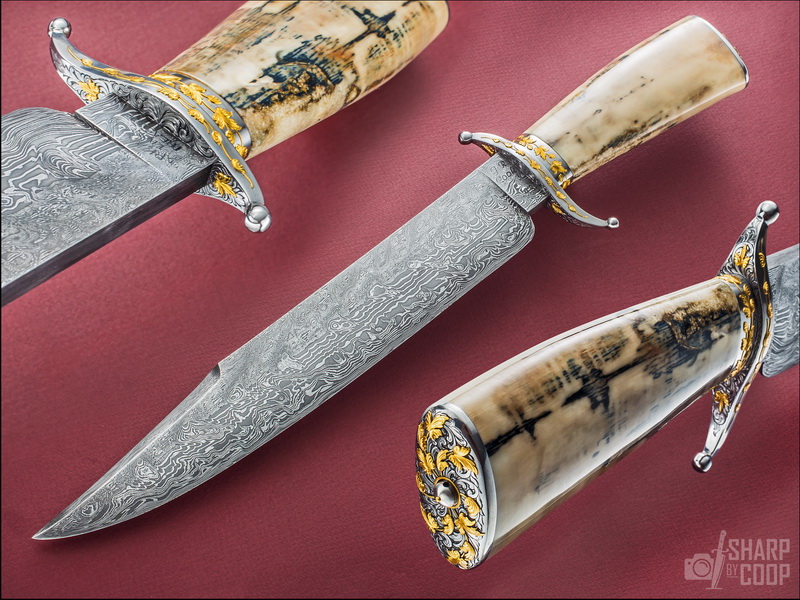 Freedom’s Steel™ VI – Victory’s Edge™ Bowie will be a featured auction item at the NRA-ILA Dinner and Auction during the NRA Annual Meeting in Atlanta, Georgia. This is the sixth year in a row that Knife Rights has donated a Freedom’s Steel™ knife, raising over $120,000 the first five years.

Ritter noted, “we are indebted to these incredibly talented artisans who contribute their valuable time, talents and materials to support Knife Rights by creating this extraordinary knife.” Each craftsman’s efforts and every component of Freedom’s Steel™ VI was donated to Knife Rights to support its efforts to defend and enhance our right to own and carry knives as tools used daily by millions of Americans and at times wielded as an “arm” in self-defense.

Freedom’s Steel™ VI was conceived of, and sponsored by, Knife Rights expressly to benefit NRA-ILA.

Master Blade Smith J.R. Cook has forged a signature styled Arkansas Bowie in his unique “Transition” Damascus pattern that he first developed with an Innovation Grant from the Custom Knife Collectors Association in 2012. The difficulty and effort required to produce this striking pattern that “transitions” from 1,000 layers at the spine to 400 layers at the edge, with rippled drops in the transition zone, means it is used on only a very select few knives that Cook forges.

The Damascus steel was forged from alternating layers of 1084 & 15N20 high carbon steels. The S-curved guard with ball ends and the fittings are 416 Stainless Steel, masterfully hand-filed and then polished to prepare them for engraving.

The tang is marked with Cook’s “Arkansas Living Treasure” stamp on the obverse, one of very few very special knives thus marked (more below in his bio).

The fitted handle of exhibition grade fossil Walrus Ivory is perfectly contoured; swelling at the butt for a comfortable and secure grip, ensuring the knife isn’t going to slip whether it is used for chopping wood or self-defense.

The handle is secured to the knife by an internally threaded spindle nut, through the pommel, to the hidden tang of the knife. Stainless steel hidden pins ensure perfect alignment of handle to the spacer, guard and blade.

Measuring 15 and a quarter inches from finial to tip, Freedom’s Steel™ VI – Victory’s Edge™ Bowie’s 10 and a quarter-inch long by 9/32-inch thick blade might be considered far too beautiful to ever use, but it is still a perfectly functional tool handcrafted to do any job a Bowie knife might be asked to do. 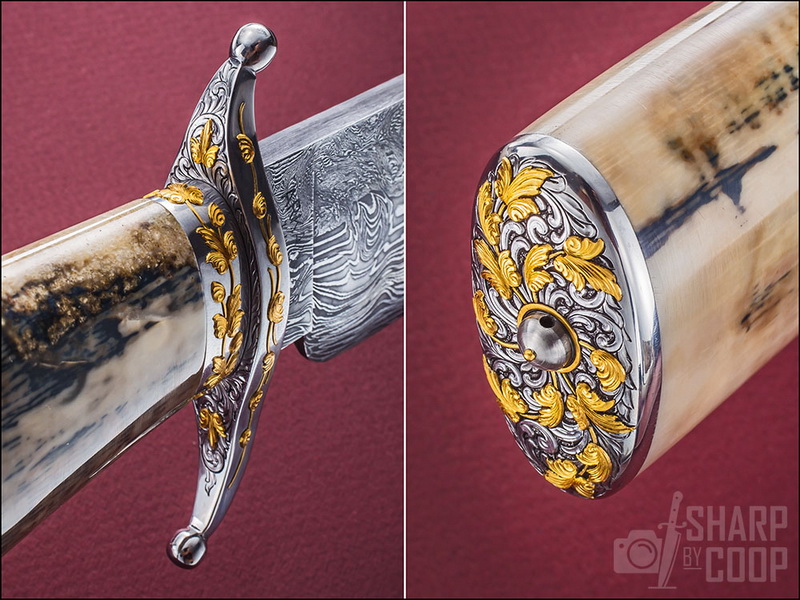 Freedom’s Steel™ VI – Victory’s Edge™ Bowie has been engraved by world-renowned engraver Barry Lee Hands, the President of the Firearms Engravers Guild of America (FEGA). Hands has been recognized by his peers with the title of FEGA Master Engraver.

Hand’s extraordinarily rich engraving consists of raised 24k Gold overlays and inlays in his signature “Renaissance Leaf” pattern on the guard, spacer and pommel. Altogether on this knife there are 44 Renaissance Leaves made from .3mm 24k .999 fine pure Gold, each painstakingly created, one by one. In addition there are 10 inches of 28 gauge 24K .999 fine Gold wire connecting the leaves as “lines of grace.”

This Bowie exhibits the perfection that has earned Hands his exalted worldwide reputation, executed at the highest level of proficiency and skill. Hands noted while describing his work on Freedom’s Steel™ VI – Victory’s Edge™ Bowie, “beyond a doubt this is the most sophisticated engraving by a Firearms Engravers Guild of America Master Engraver ever seen on an ABS Master Smith Bowie.” 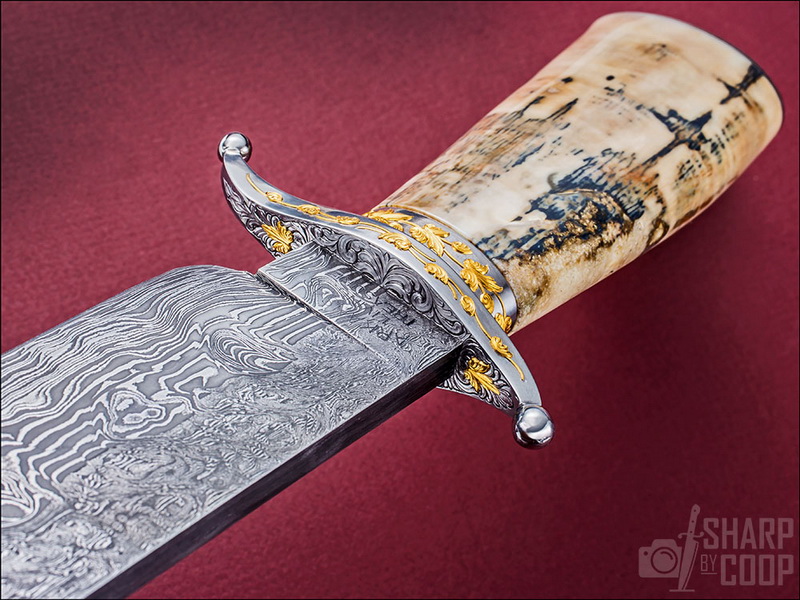 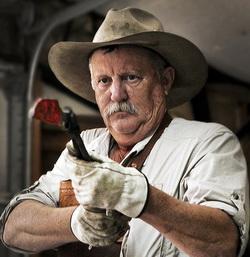 Master Smith James (J.R.) Cook made his first knife in 1986 and later that year first sold a knife. He relates that “I started making knives trying to make something better than what I could buy in a store. I found that I truly love the craft and the many aspects of it. It is very appealing to know I am making something that is cherished and will be passed down through the generations to come.”

Cook earned his Journeyman Smith certification from the American Bladesmith Society in 1989 and his Master Smith designation 1991. In 2005, having established himself among the top echelon of bladesmiths, he took the leap and became a full-time knifemaker.

In 2012 Cook was awarded a $15,000 innovation grant from the Custom Knife Collectors Association which led to the development of his unique and distinctive “Transition” Damascus.

Cook’s awards are too numerous to list, but include virtually every major award by virtually every major knife show throughout the world. Cook’s knives are collected by many of the world’s most discriminating collectors. His knives have been featured in magazines around the world, most recently in China, France and Brazil. 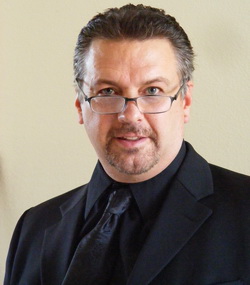 The beginning of Barry Lee Hands lifelong passion started when he was professionally apprenticed to an engraver at the age of seventeen. Over the next thirty years he would become world renowned for his outstanding style, entailing the combination of time-honored techniques with his own innovative designs. Today, his master level work is in great demand and considered, by many, to be some of the finest in the world.

Mr. Hands has developed unique, proprietary techniques available exclusively from him for sculpted overlays, heavy damascene, black satin background, among many, and most unusual, the inlay of gold in pearl and jade, which he has titled “Gilded Pearl” and “Gilded Jade.”

Mr. Hands is a well known authority on the Art and History of engraving, authoring articles for such prestigious publications as The Double Gun Journal, Shooting Sportsman, Gunmaker and Engraver.

In addition to his extraordinary donation of engraving here, Mr. Hands has also donated his time to organizations such as Wounded Warrior, The Knifemakers Guild, The Light of Hope Cancer Foundation, The National Rifle Association and the American Custom Gunmakers Guild. 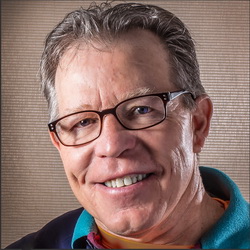 Jim Cooper has become the “go to” photographer for knifemakers and knife collectors as much because of the friendships he has developed over the past decade and half as his clear talent at presenting and promoting the beautiful knives he loves photographing.

While his job as a professional photographer in handmade knives is what he does, Coop, as he is known to his friends, is quick to note that what he “loves are the people involved in this craft. There are rich talents and unmatched friendships in every display.”

Coop takes pride in arranging insets of different views of the knife and making them look plausible, varied, and interesting. Lighting is key; the shadows are real. His backgrounds are all rich papers; he does not use digital backgrounds.

Coop is 63 years old, living with his wife and 14-year-old son in the Northeast USA. He explains, “I love knives; I enjoy photographing knives, and I am a collector of 50 handmade knives myself.”