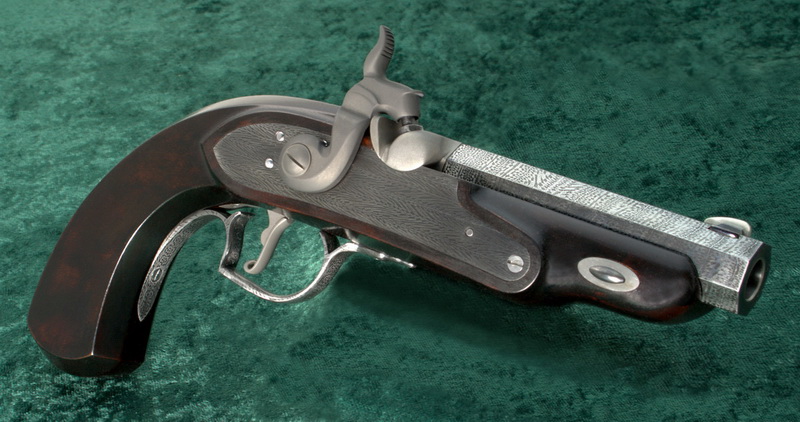 Freedom’s Steel™ Damascus Pistol will be a featured auction item at the NRA-ILA Dinner and Auction to be held at the NRA Annual Meeting in Nashville, Tennessee, the evening of April 10, 2015. Proceeds from the sale of Freedom’s Steel™ Damascus Pistol will support NRA-ILA efforts to defend the Second Amendment.Click here for information on the NRA-ILA Dinner and Auction

Ritter noted, “we are indebted to Master Bladesmith & Master Gunsmith Steve Culver who contributed his extraordinary talents and materials to support Knife Rights by creating this historic pistol.” Culver generously donated the pistol to Knife Rights to support its efforts to defend and enhance our right to own and carry knives as tools used daily by millions of Americans and at times wielded as an “arm” in self-defense.

After the better part of a century, the lost art of making spiral welded Damascus gun barrels has been re-discovered by Master Bladesmith & Master Gunsmith Steve Culver. This history-making hand-crafted .45 Cal. percussion pistol incorporates only the second spiral welded Damascus gun barrel ever made since the last one was produced in 1930. Culver experimentally produced the first one in 2012 after years of research and effort.

The .45 caliber barrel used on Freedom’s Steel™ Damascus Pistol is of Bernard pattern Damascus steel. Firearms historians believe that gun barrels of Bernard pattern were last made in Belgium. The Damascus gun barrel industry was wiped out during World War I, but was revived briefly in Belgium starting in 1924 with some of the last remaining forgers. Unfortunately the effort didn’t last. As the 100th anniversary of the start of WWI was in 2014, this creation of a gun barrel in Bernard pattern was done on the 100th anniversary of the last time that this Damascus pattern barrel was made.

There are 81 steel rods stacked into the billet, 41 rods of 1084 steel and 40 rods of 1018 steel. The rods were stacked in a 9 x 9 checkerboard arrangement. This stack of rods was forge-welded into a solid block which was then drawn out by forging and cut into two equal lengths. Each length was then drawn out into rods that were 1/2″ square and then the two rods were twisted along their entire length, at a rate of 3 1/2 revolutions per inch. The rods were then forge welded to each other along their lengths to make a “riband,” or bar of Damascus. All of the Damascus steel for the pistol came from this riband.

In order to create the barrel, the riband was wound around a steel mandrel to form a coil. The turns of the coil were then forge welded together to create a solid barrel tube. It is much more difficult, technically, than it sounds. It took Culver years to figure out how to do it.

The bore of the rough forged barrel tube was drilled and reamed to remove imperfections and create the smooth finished bore. The outside of the tube was then machined into its final octagonal form.

The lock was designed and hand-crafted by Culver in the traditional side-lock style. The lock-plate is made from the same Damascus steel as was used to make the gun barrel. The intricate trigger guard was forged to shape from this same Damascus and then hand finished. A Sterling Silver blade sight was inlet into the barrel.

The historic Cherry wood used to make the pistol stock came from the site of George Washington’s childhood home and was provided by Historical Woods of America. Culver hand-carved the final lines of the 1850s era style stock, carefully fitting it to the mechanical parts of the pistol.

Freedom’s Steel™ Damascus Pistol is presented in a custom-built black walnut display case by Brookfield Case. It features glass on four sides and the top.

Extensive Work in Progress video and photos documenting the making of this pistol will be provided to the purchaser. You can watch a brief video (edited from these WIP videos) about the making of Freedom’s Steel™ Damascus Pistol:

A sampling of the WIP photos can be viewed by clicking here or on the montage below. 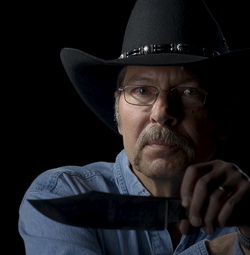 Steve started making knives in 1987, sold his first knife in 1989 and passed the American Bladesmith Society’s demanding Master Smith test in 2007. He has been a full time knifemaker since March, 2004.

Steve is also a Master Gunsmith. He no longer takes in gunsmithing work, having chosen to concentrate primarily on knifemaking. Becoming an accomplished Master Bladesmith has steeped Steve in the intricate, but brutal art of forging and working with Damascus steel.

With a background as both a gunsmith and a bladesmith, and an insatiable curiosity, the mysteries of Damascus gun barrels soon became a siren’s song for Steve.

Historical Woods of America’s (HWA’s) goals and services are squarely focused on the reclamation, salvaging and creative repurposing of historical trees and timbers, as well as trees from private, non- historic clients, such as homeowners who have trees to which they have a sentimental connection.

HWA works exclusively with trees or limbs that have fallen in storms, are diseased, unsafe, or are being removed for construction or to maintain the health of the tree — along with timbers removed from historical sites during renovation of existing structures. The wood thus harvested can then be turned into a host of items which have historical connection or sentimental significance.

HWA has preserved the historical legacy of many of America’s “witness trees” that grew at the sites of government, national landmarks and historic colonial mansions. Much of this wood has a presidential connection, such as Washington’s Mount Vernon, Jefferson’s Monticello, Madison’s Montpelier, as well as several Civil War sites in Virginia.