Freedom’s Steel™ VII – Defender’s Edge™ Integral Big Bear Sub-Hilt Fighter will be a featured auction item at the NRA-ILA Dinner and Auction to be held at the NRA Annual Meeting in Dallas, Texas, the evening of May 4, 2018. Proceeds from the sale of Freedom’s Steel™ VI will support NRA-ILA efforts to defend the Second Amendment. Click here for information on the 2017 NRA-ILA Dinner and Auction. This is the seventh year in a row that Knife Rights has donated a Freedom’s Steel™ knife, raising over $210,000 the first six years.

Ritter noted, “we are indebted to these incredibly talented artisans who contribute their valuable time, talents and materials to support Knife Rights by creating this extraordinary knife.” Each craftsman’s efforts and every component of Freedom’s Steel™ VII was donated to Knife Rights to support its efforts to defend and enhance our right to own and carry knives as tools used daily by millions of Americans and at times wielded as an “arm” in self-defense.

Dietmar Kressler of Germany is internationally acclaimed for his extraordinary integral knives. Integral means that they are created from a solid billet of steel by carefully removing steel until all that is left is a blade, guard (hilt and sub-hilt in this knife), tang and butt cap, all one solid piece. Kessler sets himself apart from many integral knife makers in that he uses no computer controlled (CNC) machinery to remove all that metal; it is all done painstakingly using conventional tooling. Kessler’s Big Bear Sub-Hilt Fighter is the pinnacle of his integral knives, his most difficult and desirable creation.

Kressler spent time in America as a young man and was a member of NRA. It was early in his knifemaking career and he says he often thought he should donate one of his knives to NRA to support the cause of freedom. Many years later when the opportunity offered itself, he jumped at the chance. Living in Germany, he notes, “you really appreciate the freedom and safety American’s enjoy because of the NRA.”

Defender’s Edge™ crossed the Atlantic three times during its creation. After Kressler finished it to final shape, it was shipped to Montana for engraving by internationally celebrated knifemaker and FEGA Master Engraver Rick Eaton.

The knife was shipped back across the Atlantic where Kessler heat treated the knife and carefully fitted the highly-figured 10,000-year-old Mammoth Ivory handle scales. Finished to his signature hand-rubbed finish, it was shipped back across the Atlantic to Eaton for final installation of the 24K Gold inlay and inking. Freedom’s Steel™ VII – Defender’s Edge™ Integral  Big Bear Sub-Hilt Fighter was finally complete and ready to be part of some lucky person’s collection. 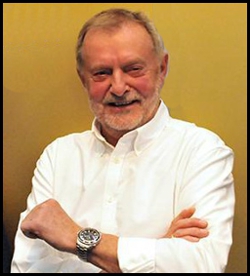 Kressler spent time in America as a young man and was a member of NRA. It was early in his knifemaking career and he says he often thought he should donate one of his knives to NRA to support the cause of freedom. Many years later when the opportunity offered itself, he jumped at the chance. Living in Germany, he notes, “you really appreciate the freedom and safety American’s enjoy because of the NRA.” 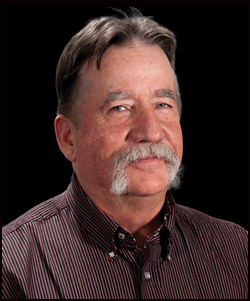 Rick Eaton started scrimshawing in 1979. He made his very first knives in 1982. He began making handmade knives in 1984 after learning from his father. He started engraving in 1983. Since 1993, Rick has been engraving and making knives full time.

His fine engraving includes scrollwork, gold inlay, full relief, banknote, and Italian bulino. Bringing together all the elements of a knife – heat treatments, steel creation, engraving, and the final finish – to make a beautiful, well-crafted piece is what Eaton loves most about his art. In 2005 he enjoyed a Master’s Engraving Class with one of America’s most renowned Master Engravers, Winston Churchill.

Eaton was voted into the The Knifemakers’ Guild in 1997. He has won awards for his knives and engraving at cutlery shows worldwide. Eaton is a member of Art Knife Invitational, the world’s premier invitational fine cutlery show and the only winner of The Knifemakers’ Guild’s Cronk Award with a folding knife. He has been an engraving instructor for the GRS Training Center since 2005. 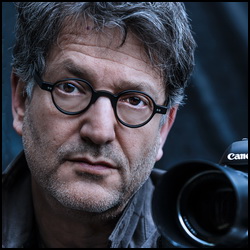 I’ve been in the photography business for the last forty plus years. Started my career in an art museum taking photos for exhibits and publications, then as a catalog photographer for a series of large Chicago studios. Twenty one years ago I started my own studio, Prairie Digital Inc.

As a commercial photographer I’ve shot everything from tour buses to microchips – but my passion is photographing custom knives.

Every knife I shoot challenges me to go beyond just “taking” a photo to making an illustration that communicates something extraordinary about that knife.