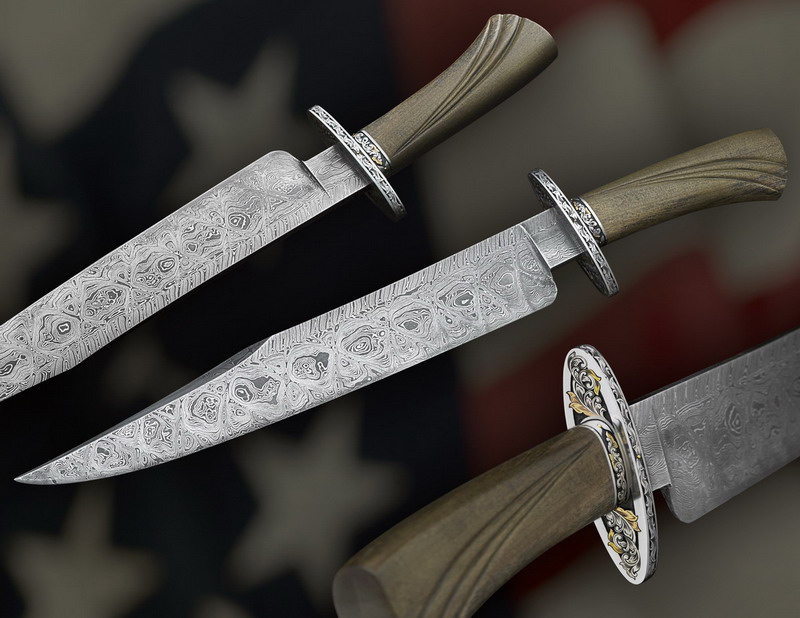 Freedom’s Steel™ IV – The Jefferson Bowie will be a featured auction item at the NRA-ILA Dinner and Auction to be held at the NRA Annual Meeting in Nashville, Tennessee, the evening of April 10, 2015. Proceeds from the sale of Freedom’s Steel™ IV will support NRA-ILA efforts to defend the Second Amendment.Click here for information on the NRA-ILA Dinner and Auction

Ritter noted, “we are indebted to these incredibly talented artisans and companies who contribute their valuable time, talents and materials to support Knife Rights by creating this extraordinary knife.” Each craftsman’s efforts and every component of Freedom’s Steel™ III was donated to Knife Rights to support its efforts to defend and enhance our right to own and carry knives as tools used daily by millions of Americans and at times wielded as an “arm” in self-defense. 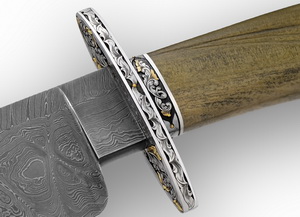 The body of the blade has 239 layers, one for each year from 1776 to 2015. The pattern in the body the blade has 21 Xs forged into the steel to formally salute our Constitution and the Second Amendment.

The dramatic on-of-a-kind 12.75-inch Damascus blade of Freedom’s Steel™ IV – The Jefferson Bowie was forged by National Living Treasure and American Bladesmith Society Master Bladesmith Jerry Fisk with two distinct patterns to honor our Second Amendment. The pattern on the spine of the blade was first forged with 13 layers of high carbon steel, one layer for each of the original colonies. Fisk then folded that 13-layer billet to 39 layers, the number of the signers of the Constitution. He then twisted the bar to the right (of course) honoring the rights accorded to all Americans that are incorporated into the Bill of Rights.

The histroic wood handle of Freedom’s Steel™ IV – The Jefferson Bowie is made from the wood of the “Jefferson Tulip Poplar” tree. This is from the only tree with provenance as being personally planted by Thomas Jefferson at Monticello. Fisk carved three flutes into the handle to honor Jefferson as our third President, a framer of the Constitution who was a major force and inspiration for the Bill of Rights that includes the Second Amendment.

“[A] bill of rights is what the people are entitled to against every government on earth, general or particular, and what no just government should refuse.”
— Thomas Jefferson, December 20, 1787

This historic tree was felled and salvaged by Historical Woods of America in 2008. The beautiful poplar wood is stabilized to last for generations.

The full guard and ferrule of Freedom’s Steel™ IV – The Jefferson Bowie has been deeply engraved by Master Engraver Jim Small with scrollwork and leaves representing the birth and renewal of the nation. Small added 24K gold inlays to highlight the exquisite engraving.

Freedom’s Steel™ IVis presented in a custom-built black walnut display case by Brookfield Case. It features glass on four sides and the top and a document storage drawer.

This Tulip Poplar tree is believed to have been planted by Jefferson himself off the Southwest corner of Monticello. Hollow for many years, it finally died in 2008 and was removed in June of that year by Historical Woods of America.

In his Weather Memorandum Book on April 16, 1807, Jefferson noted planting “1. Laurodendron in margin of SW [shrub circle] from the nursery.” This is the exact spot that this Poplar tree was growing. The Thomas Jefferson Foundation believes that this is clear evidence that this tree was the only one on the property that was definitely original and planted personally by Jefferson. Tree dating experts confirm the planting date noted by Jefferson as being appropriate for the estimated age of the tree at its death. For many years it was promoted by the Foundation as “America’s Millennium Landmark Tree.”

Freedom’s Steel™ IV – The Jefferson Bowie will be a featured auction item at the NRA-ILA Dinner and Auction to be held at the NRA Annual Meeting in Nashville, Tennessee, the evening of April 10, 2015. Proceeds from the sale of Freedom’s Steel™ IV will support NRA-ILA efforts to defend the Second Amendment.Click here for information on the NRA-ILA Dinner and Auction

Jerry Fisk has been working full-time as a Master Bladesmith since 1989. In 1999 Fisk was named a National Living Treasure by the University of North Carolina at Wilmington’s Museum of World Cultures.

The list of awards Fisk has won both in the U.S and abroad is long and varied. He is the only double winner of the William F. Moran Knife of the Year Award. Fisk serves as Field Editor of BLADE magazine and has authored a book on Damascus steel that is used as a textbook at the acclaimed Moran School of Bladesmithing.

Fisk explains his approach to knifemaking and what drives him:

“I make knives and edged tools because of a life-long interest and desire. The only limits to this field are those I put on myself. Lots of times I blend centuries-old techniques with modern methods. I prefer designs drawn from something that simulates nature and prefer to work in natural materials.

All of my blades from field grade to ornate pieces are tested to insure they perform in the manner for which they are designed for and made as strong as the design allows.

Because of the way that I was raised, a knife to me is first a tool, and second it is pretty to look at, if done right. This is just the way I was raised. Work hard and use a good tool.

In these modern times you have to search for something that a craftsman/artist makes one-at-a-time. The days of one person working in their shop to create functional works of art are fast going, as it seems we live in a disposable world. This is your time to own something for you and your family that can be passed down. Each generation will have its own stories of the piece and the memories it holds for them. That is something to treasure for the ages.

When I was asked once, why I make knives, I said, ‘…to show that I lived.’ My work will last hundreds of years longer than I will. But now they will know I was here.” 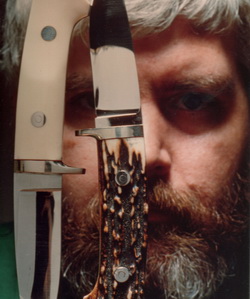 Jim Small was one of the first members of the Knife Makers Guild. He started making knives in 1968 and continues to do so, but on a limited basis. In late 70’s he taught himself to engrave and found that he could make a better living in a shorter amount of time by scratching designs in metal.

For the first few years he engraved only his own knives. In 1982 Small started engraving other makers knives and from there the engraving business grew to firearms and jewelry.

Small has received numerous accolades, including:

The list goes on and on. After almost 50 years in the business, he hasn’t slowed down.

Historical Woods of America’s (HWA’s) goals and services are squarely focused on the reclamation, salvaging and creative repurposing of historical trees and timbers, as well as trees from private, non- historic clients, such as homeowners who have trees to which they have a sentimental connection.

HWA works exclusively with trees or limbs that have fallen in storms, are diseased, unsafe, or are being removed for construction or to maintain the health of the tree — along with timbers removed from historical sites during renovation of existing structures. The wood thus harvested can then be turned into a host of items which have historical connection or sentimental significance.

HWA has preserved the historical legacy of many of America’s “witness trees” that grew at the sites of government, national landmarks and historic colonial mansions. Much of this wood has a presidential connection, such as Washington’s Mount Vernon, Jefferson’s Monticello, Madison’s Montpelier, as well as several Civil War sites in Virginia. 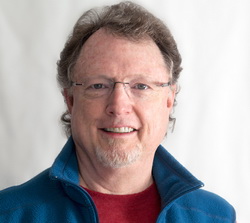 Buddy Thomason has been active in the custom knife arena for over a decade; as collector, writer, photographer and supporter of knife and gun rights. Buddy has thoroughly embraced the new world of digital image capture, using state-of-the-art gear and software to produce stunning custom knife portraits and event video. His collaborative approach ensures that every client’s vision is fully realized in the final product. Click here to see more of Buddy’s work.