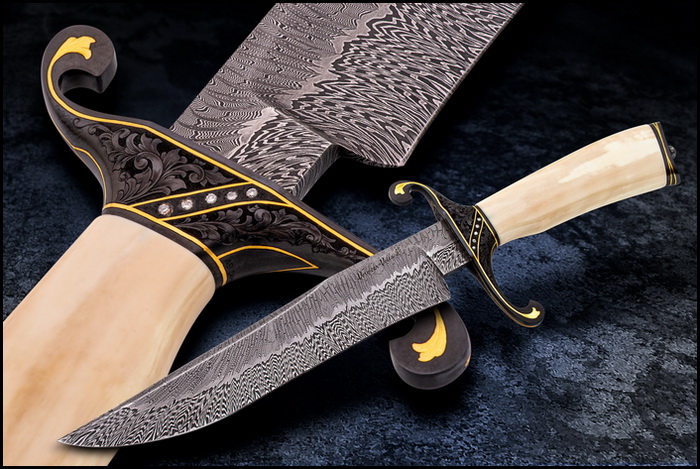 Freedom’s Steel™ X – Forged in Liberty™ Damascus Bowie celebrates the Second Front in Defense of the Second Amendment™ and the liberties we fight to protect. Our liberties were not handed to us, they were forged in the fire of revolution. Only if we continue to hammer those who would take away our liberties can we honor the foresight and courage of our founding fathers and mothers.

“Our Second Amendment freedoms have never been at such risk as they are today. We must all be active and united defenders of our rights and freedom or we will see them taken from us. Knife Rights and the NRA-ILA have a common interest in protecting our civil rights and specifically the right to own and use tools appropriate for self-defense. Knife Rights is proud to assist NRA-ILA in protecting these rights,” said Knife Rights Chairman and Founder Doug Ritter. “We are sincerely grateful for the support provided to us by NRA-ILA as we fight the Second Front in Defense of the Second Amendment.”

“Since 1871, the NRA has fought to defend the rights of law-abiding Americans. We are truly grateful for the support of our friends at Knife Rights and their continued contributions to our ongoing efforts to preserve our freedom,” said Jason Ouimet, Executive Director of the NRA’s Institute for Legislative Action.”

Ritter noted, “we are indebted to these incredibly talented artisans who contribute their valuable time, talents and materials to support Knife Rights by creating this extraordinary knife.” Each craftsman’s efforts and every component of Freedom’s Steel™ X – Forged in Liberty™ Damascus Bowie was donated to Knife Rights to support its efforts to defend and enhance our right to own and carry knives as tools used daily by millions of Americans and at times wielded as an “arm” in self-defense. 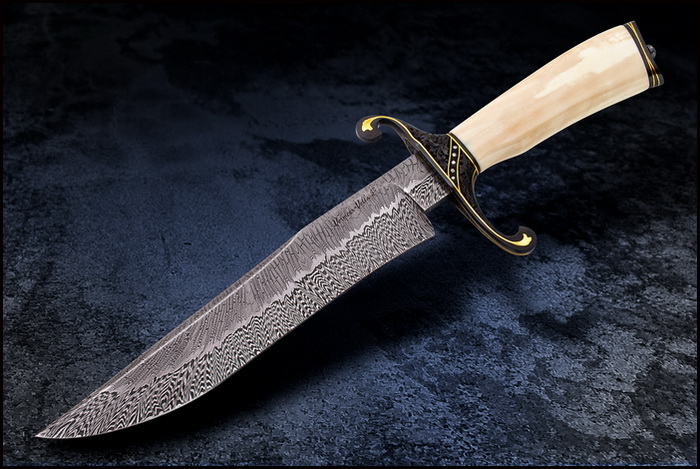 The fitted handle of Alaskan exhibition grade fossil Walrus Ivory, donated by Mark Knapp’s Edge of the Arctic Trading Post, is perfectly contoured and is secured to the knife by Vermeer-Kelly’s Twisted Ws pattern Damascus finial nut which screws onto the forged and threaded tang of the knife. Internal stainless steel pins ensure perfect alignment of the handle to the pommel, guard and blade.

Firearms Engravers Guild of America member Alice Carter, based in Caldwell, Texas, has masterfully engraved the guard and pommel with 24K Gold inlay to compliment the extraordinary Riptide pattern blade. In the guard she set 10 Diamonds from an heirloom family ring, donated by Sue and Doug Ritter. With the engraving completed she blued the guard and pommel black to produce an exquisite tone-on-tone effect that further emphasizes the Gold inlay and Diamonds.

Measuring 15 inches from finial to tip, Freedom’s Steel™ X – Forged in Liberty™ Damascus Bowie™ seems too beautiful to ever use, but it is a perfectly functional tool handcrafted to do any job a Bowie knife might be asked to do.

Freedom’s Steel™ X – Forged in Liberty™ comes with a signed first edition of “A Sure Defense: The Bowie Knife In America,” the definitive tome on the history of the Bowie knife.  It was generously donated by Knife Magazine. 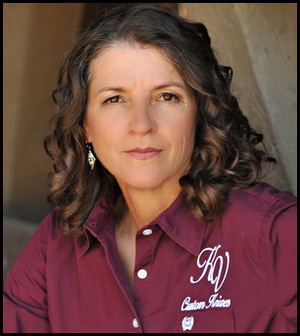 Kelly Vermeer-Vella is a farrier and bladesmith who has forged a name for herself in these male-dominated fields. She is one of only seven female American Bladesmith Society Bladesmiths. She was the very first of just four female Champions in the Forged In Fire series on The History Channel. She has competed in farrier competitions all over the world, placing fourth in the world Championships and was named to the American Farriers Team in 1998.

One of her Bowies won Best Fixed Blade in this year’s International Custom Cutlery Exhibition. Kelly started forging knives in 2011 and six years ago she began seriously pursuing her bladesmithing career, or as she says, “lost her mind.” She is an avid hunter with both firearm and bow, and an equestrian who loves riding in the mountains surrounding her home.

Alice Carter was introduced to engraving while her husband was attending a knifemaking course 15 years ago. Having an established reputation as a saddlemaker and leatherworker, the engraving aspect of knifemaking piqued her interest and it turned out to be an easy transition from tooling leather to engraving metal. Studying with several highly respected engravers enabled her to develop her own style of engraving and she currently engraves knives for many of the nation’s premier knifemakers. Knives she has engraved have won numerous awards at knife shows throughout America. She is a member of the Firearms Engravers Guild of America and also engraves firearms.

Mark Knapp, a tool and die maker with 38 years experience, along with his wife, Angel, own and operate Mark Knapp Custom Knives located at Edge of the Arctic Trading Post – Custom Knives and Art Gallery in Fairbanks, Alaska. The shop is a full service machine shop, custom tool making and knife sharpening shop. Mark’s background as a tool and die maker and several semesters enrolled in the University of Alaska’s Fine Arts Program provide Mark with the working knowledge to produce knives of superior quality and exceptional beauty.

Having worked seasonally as a big game guide, professional trapper and commercial fisherman for over half of his adult life, Mark is fortunate to have acquired an insight into the form and function of knives from working field knives to true works of art.

At Edge of the Arctic Trading Post, you will not only find Mark’s handmade creations, but you can also choose from carvings and artwork by gifted craftsmen and women from around the state and choose from our selection of quality ulus made right in the store.

Fellowmakers works to help promote craftsmen through promotional photography, custom apparel, and social media. Fellowmakers is owned by two accomplished knife makers, Dirk Loots and Allen Surls. Whether you are looking to capture a beautiful image of your work, develop a website, or have someone design and handle your swag needs, Fellowmakers has you covered. Join the group of craftsmen that utilize the services of Fellowmakers and use your time to focus on creating your crafts.

Allen Surls began his journey as a knife maker in 2013. He spent time learning under many makers including Fiddleback Forge where he honed his skills while being its Vice-President. Allen was the former President of the Georgia Custom Knifemakers Guild and also was voted into the Knifemakers Guild. His style ranges from traditional to rustic frontier.

Dirk and Allen are also two of the Partners at Pop’s Knife Supplies, knife supplies from knife makers. 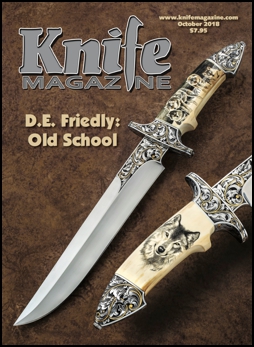 50% larger than a standard magazine, KNIFE Magazine serves dedicated knife enthusiasts who want the best in informative, objective, and timely content. Among its regular contributors are cutlery hall-of-famers and other respected experts in their fields, and its big, beautiful photography is unrivaled.

Whatever sort of knives interest you – handmade, factory, vintage, collectibles, military or hard-working users — you’ll find something of interest in each monthly issue – not to mention the latest news from the industry, knifemaking organizations, and of course from Knife Rights.

Available ONLY by subscription! 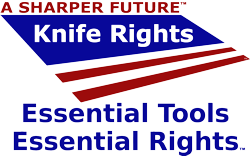 Knife Rights is the Second Front in Defense of the Second Amendment™. Knife Rights is Rewriting Knife Law in America™, forging a Sharper Future™ for all knife owners with 36 bills repealing knife bans enacted in 25 states and over 150 cities and towns since 2010. Knife Rights is dedicated to providing knife owners an effective voice to influence public policy. Decisions in cases we have litigated have been cited in numerous Second Amendment cases and has been an amici in a number of important 2A cases, including New York State Rifle & Pistol Association v. Bruen currently before the U.S. Supreme Court.